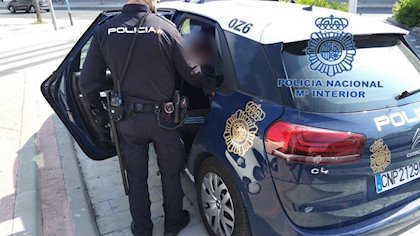 Police arrest suspect at the supermarket where she refused to leave and tried to attack an officer.

THE woman spent all afternoon walking in and out of a supermarket in the Costa del Sol without making any purchases and bothering customers until she was finally arrested.

She spent all afternoon outside on the street, not respecting the quarantine restrictions set out by the national State of Alarm in order to prevent the spread of the coronavirus. She was walking in and out of a supermarket in Benalmadena without purchasing anything, instead, she was simply walking around disturbing both customers and workers, causing the National Police to come and intervene.

She then proceeded to try and attack an officer minutes before she was detained and confessed that she arrived in Spain from Russia a few days ago and her intention was to spread the coronavirus.

The incident took place during the first days of the quarantine at the Mercadona in Torrequebrada on the Estrella del Mar Avenida. During the late afternoon, the private security guard from this supermarket caught the attention of a National Police car which was patrolling nearby and explained his issue with the 44-year-old Russian national who refused to leave the establishment despite the fact that they were closing.

The security guard then led the police officers to the access stairs of the establishment where the woman was waiting and proceeded to ask her for identification which she refused and replied to with ridiculous answers. She even tried to get into the police car, which thankfully the officers managed to prevent.

The police officers explained to her that she could not stay on the public roads due to the quarantine rules set out by the State of Alarm, however, she pounced on one of the officers and tried to hit him without success, causing them to detain her.

When they transferred to her to the cell in the police station, she explained that she had travelled from Russia via Madrid and intended to spread the coronavirus. After going to court, she was released on bail.