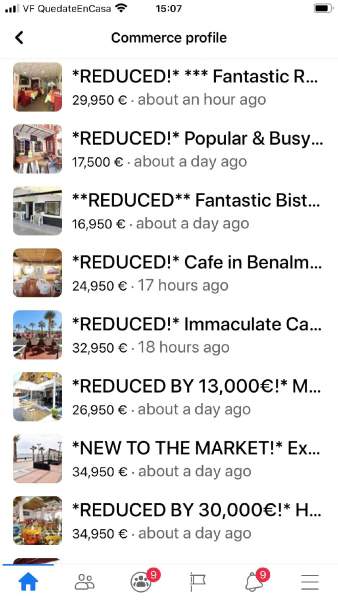 ANY regular holidaymakers to Spain’s Costa del Sol may find their regular drinking haunts dry when they return as bar owners bail out the business after the coronavirus crisis.

Bars are going on the market daily as owners sell up with prices crashing by up to 40 grand of sale prices with even further reductions expected to hit the market.

Whilst at the same time bar owners are simply throwing in the towel with no plans to re-open at all.

Restaurants are also in the same position with mass reductions as business owners run dry of cash and flood the market with listings with huge reductions in price.

One bar owner who didn’t want to be named in fear of putting off potential buyers told the Euro Weekly News:

“I thought I would be early getting to market, but I was amazed how much had already been listed and how the prices were devaluing so quickly, I’ve reduced personally by €20,000 but I have seen some as much as 40 to 50 thousand in asking prices, we like many aren’t going to bother opening up, we don’t have the cash left to do so, the lockdown has killed us, we need cash in the bank now and to do that we are forced to sell up and return back to the UK, it’s not just us it’s many, even owners who have been on TV’s New Life In The Sun.”

David Abraham who was prepared to be named without mention of his bar’s title said “It’s sad, very sad we have traded well in Fuengirola for seven years, but with the rents and running costs we just made a good living for long hours but the lockdown has crippled us financially now as we got no assistance, not even relief from our landlord, I’ve reduced 30k off my asking price as the market’s getting slashed with others in the same boat, most bar owners know that margins are going to get slashed when eventually bars can get open again and are bailing out, rescuing as much cash as possible from a sale, we are flying home as soon as we can and just leave the bar to be sold as soon as possible by the agent Gary Adamson from Bars Abroad, hopefully the cut price of the bar will attract someone quickly.”

We spoke to Gary Adamson the MD of Bars Abroad who said “I’ve been listing reductions all day and will be all week, there’s going to be some real deals to be had for those buyers who have the cash and are prepared to wait until the situation here gets back to normal, buyers need to look at the long term as well as take advantage of the huge reductions right now.