Thousands of parents flout restrictions across Spain’s Costa del Sol to Costa Blanca on first day kids allowed out after 6 weeks of house arrest, so police prepare to hand out hefty fines from tomorrow 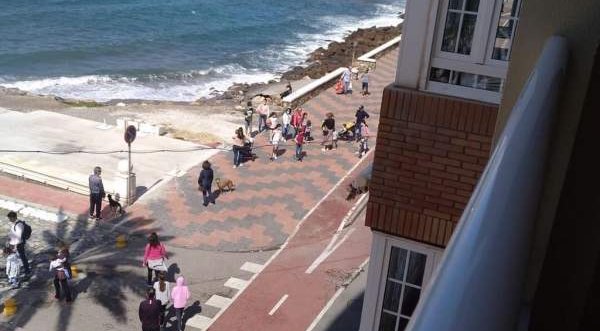 Thousands of parents have flouted the law across Spain today on the first day that children have been allowed out after six weeks of house arrest.

THE police across Spain have had their work cut out for them today as parents were finally allowed to take their children out for a walk for about an hour. However, according to Local and National Police, as well as videos and photos on social media from shocked neighbours, many have flouted the law. So police prepare for a zero tolerance police and hand out hefty fines of up to €1,500 from tomorrow.

Under Spain’s State of Alarm’s amended regulations, the rules clearly stipulate that only one adult can go out with up to three children (under the age of 14). They can go out once a day for a maximum of one hour up to a maximum distance of 1km from the home, between the hours of 9am and 9pm – by foot and not by car. A two-metre distance must be maintained with others. Playgrounds are strictly off-limits and so is playing with other children. Children, however, can take their own toys, bikes or scooters, but not the electric variety.

Despite the strict rules, many fines and warnings have been handed out to parents flouting the law, for example, for staying out for more than an hour, playing football in groups, sunbathing on the beach for hours, two parents out with one child, and basically for not maintaining social distances of between one to two metres. Although most parents have tried to abide by the rules, many haven’t and been branded as “irresponsible” as the Twitter feed below shows.

Mike Roderick, a local resident who lives opposite the beach in Los Boliches in the Costa del Sol, was shocked at the scenes he witnessed on his local beach. “What I’ve seen today is incredible,” he said. “They are meant to be coming for exercise and the kids are riding around on electric scooters!”

Police officers on motorbikes, in cars and on foot are still combing the beaches and streets of Costa del Sol today as many parents flout the regulations. A Local Police officer told George Stephens from EWN, “ I’m not sure what parts of the law these parents don’t understand. They are even driving down to the beach by the car load. We’ve had parents sunbathing all day, whilst their kids run around on the beach and we’ve even already had a case of a lost child. Most parents have had warnings, but a few have been argumentative, so they have been fined. Tomorrow we will endorse a zero tolerance policy.”

The police have warned that breaking curfew rules, such as leaving the house with children outside the specified hours (9am-9pm), or taking more than three children out at once, playing on swings/roundabouts or going further than the recommended one kilometre distance from home, could land a €601 fine. However, more serious matters, such as congregating and chatting with other adults or children, or walking with other groups could see parents being slapped with a fine of around €1,500.