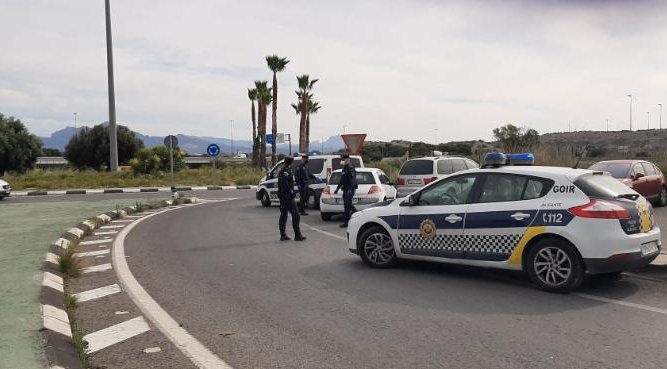 Five hundred extra officers are carrying out round-the-clock surveillance across Alicante as authorities fear a spike in confinement breaches over the national holiday weekend, in particular second home owners.

LOCAL and National Police have warned the controls, which began last night, will be 24-hour to ensure compliance as Spain prepares for de-escalation.
In addition to Labour Day tomorrow (May 1), adults will be able to leave their homes for exercise, with restrictions.
Alicante City Council’s Department of Public Safety confirmed 500 officers will “monitor compliance with the measures,” including public transport and policing beaches and other public areas.
https://www.facebook.com/AyuntamientoAlicante/videos/585198495431916/

Informative posters have been pasted around the city reminding people to keep their distance and to respect off-limit areas.

A council spokesperson said: “It is forbidden to use recreational areas, sports facilities and children’s playgrounds. Access to beaches are closed, and we recommend the use of masks and gloves over the weekend.”
The National Police is also checking train and bus stations to make sure any trips are justified.
And they are working with the Local Police to “reinforce controls and guarantee the closure of accesses to the city.”
Similarly, supermarkets, typical second home developments, car parks and similar areas will be monitored to prevent journeys from other provinces.
Councillor for Security, Jose Ramon Gonzalez, said the public must “strictly comply with the rules, make an effort and be responsible, keep your distance if you decide to go out for sports, avoid crowds in the daily walks with children and remember that the confinement and the State of Alarm are in force because of a pandemic.”
Responding to the stepped up policing, Raquel CM posted said: “I already saw this coming, I’m freaking out with what I’m seeing in my street. It’s full of people, no masks, no gloves, without respecting distance, speaking in groups. This shows the level of knowledge and responsibility.”
Since last night, 51 people have been fined by police for non-compliance, with many being adults walking with children.
*All beaches in Alicante remain closed, including San Juan, Albufereta, Postiguet, Urbanova and Tabarca. And any activity, including swimming and fishing, is forbidden.