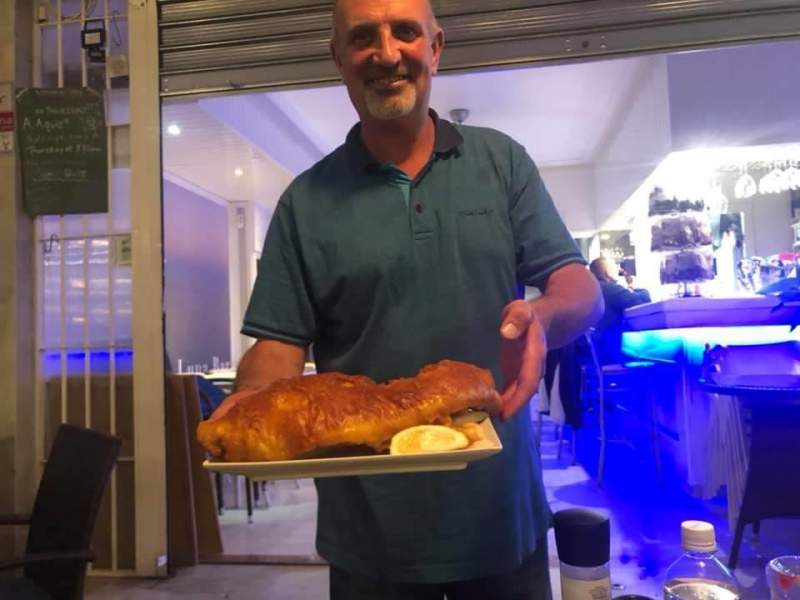 King Of The Fish During Normal Times

The ‘King Of The Fish’ has taken a bit of a battering from expats on Spain’s Costa del Sol and in the UK after his recent comments regards when he can open.

Mark Sutherland who owns and runs the Luna bar on Fuengirola’s sea front, this week expressed his opinions to the Euro Weekly News in regard to the lack of clarity on when and how he can open his well established business.

Whilst the majority of bar and restaurant owners across the Costa del Sol agreed with him as well as many customers, some gave him a right battering to his views.

Scotsman Sutherland who’s notorious for his large fish on a Friday evening, who often attracts worldwide celebrities such as recently Katie Price and others like Liam Gallagher, Frank Lampard and others, hit out last week as he challenged the lack of clarity for bar owners, including well made points about when and how? Stressing that capacity has yet to be confirmed despite strong indications it will be only 30 per cent when they can finally open, at the same time if it’s terraces only to start with, how are customers meant to frequent the toilet for example?

Reader Christopher Southern though had no sympathy as he said from his UK base “Mr King of Fish should show more respect for those risking their lives on the front lines in the UK instead of lining his pockets with tourist money during the summer, he and the other expats complaining about lack of tourism during summer hols should be ashamed of themselves.”

Hugh Ash kept it short and to the point “Another bleating idiot.”

Whilst Timothy Spencer from La Cala said “I sort of get his point, but he needs to be patient like everybody else, we don’t want this virus returning, but saying that I do feel for all business owners during these present times, as always it comes down to money at the end of the day.”

Karen Lake agreed with the plans so far and said “I think the plan is spot on, having no dates leaves it open to change should the situation change. People need to be patient and weary of not moving forward too quickly and ending up having to go into complete lockdown again.”
Although Roy Rostance was in full support who said “Fair comment, it’s always the fine detail that is missing in these circumstances, would it be possible to provide bacterial wipes before and after toilet use? I can see the distress this is causing, but this will pass and we will have overcome the problems we now face. The thing is we have to learn and plan for the next time this happens. Can’t wait to try the fish and chips.😷😎❤️”
Mark though told the Euro Weekly News this morning “I guess it’s all about opinions, those who have battered me like a large piece of cod, I say this, all I want is some clarity to as and when, that’s all we are asking as business owners, hundreds of us, need to be able to prepare, as for Mr Southern’s comments, we are hardly lining our pockets right now but we do have rents to pay and families to feed and with no income for two months now nearly it’s not much to ask is it? But I wish him well and hope he keeps safe over there in the UK.”