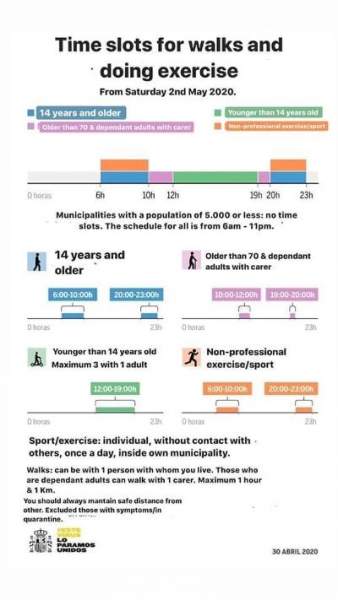 AS the Spanish government released the timetable for when everybody can leave their homes to take an hour’s exercise expats soon reacted and called the Euro Weekly News desk or emailed their reactions with some calling the timetable farcical.
Grandmother Grace Hemmings  said “I was hoping to see my three grandchildren out playing whilst I take a stroll too, but as I have just turned 70 I can’t – I only turned 70 last month but feel I am being penalised for being 70, I’ve missed them so much the last eight weeks and I was really looking forward to it, but those hopes have now been dashed.”
Billy Collier from Fuengirola immediately saw a loophole and said he will be going out twice a day and feels everyone else will too as he said “So we have a window of opportunity in the morning and one in the evening, so in reality that’s two hours out because there’s no way the police can tell if you went out in the morning or not, so the hour ruling is quite farcical really isn’t it, are the police going to put a stamp on your hand that doesn’t wash off? Of course they aren’t, so it’s two hours at least for me a day.” 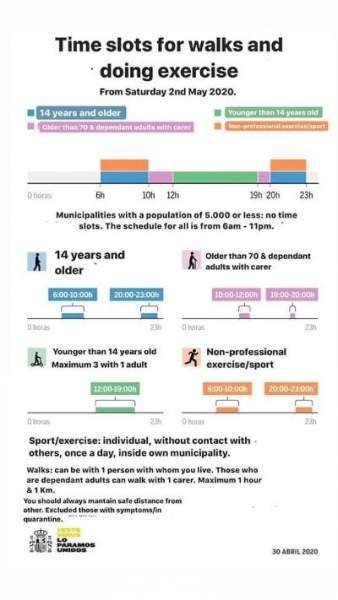 Trevor Jennings from Alicante wrote in and said “What a joke this is, this isn’t going to control anything plus they are sending the OAPs out in the hottest part of the day, that’s not going to work very well is it? Yes they have an evening opportunity, but offering them out in the heat is daft, they have been limited.”
Dawn Watkins from Olba isn’t impressed at all as she rang and said “Who on earth made this timetable up and more to the point it’s never going to work, talk about making matters complicated for the police, are they going to be issued stop watches and clock people and how on earth are they going to tell if you have been out once or twice, take everyone’s photo from the sky?”
Barry James from Valencia though issued a warning “If you are going out leave your mobile phone at home because if you get stopped they can tell from the data on your phone if you have been out more than once, my pal reckons that’s what they will be watching from special control rooms to detect flouters of the timetable, he says he used to work at GCHQ and that’s how many get caught by their mobile, me I will be out twice a day but mobile free, they aren’t going to catch me out.”