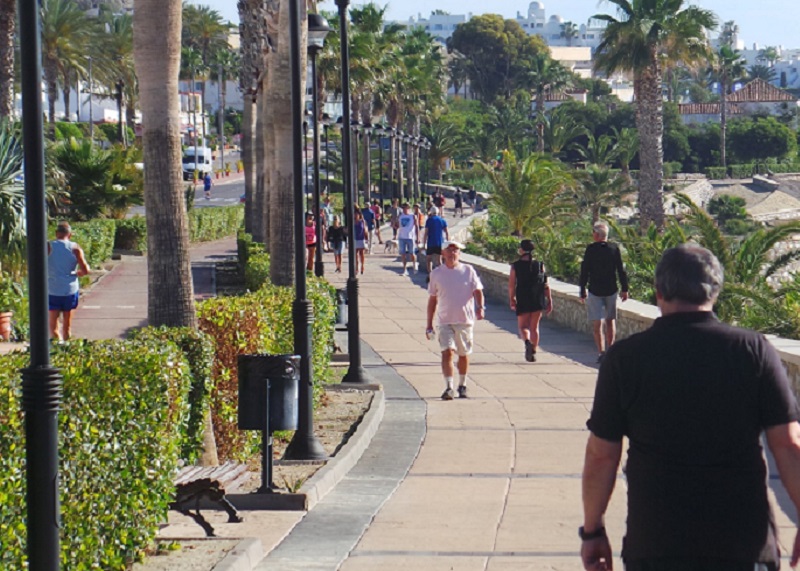 OUT AND ABOUT: There were plenty of people stretching their limbs on Mojacar Playa’s seafront promenade this mornng CREDIT: Brad Swift Facebook

EXPATS living on the Costa Almeria have welcomed the first day of exercise freedom in a relaxation of Spain’s strict coronavirus lockdown restrictions.
Certainly the long-awaited chance to get out for a walk and stretch the limbs in the fresh air for the first time since the state of alarm came into force on March 15 seems to have lifted people’s moods, judging by comments posted today Saturday on local forums.
“Very much needed, all done within our ‘circle of freedom’. What a beautiful day to be released”, said a “feeling energised” Steve Ball in Mojacar Playa after taking a stroll.
Also in Mojacar, a happy Brad Swift echoed Steve’s thoughts.
“Nice to be out and about this morning. We really do live in a beautiful place”, he mused.
“Loads of Lycra getting a stretch this morning”, joked Richard Raynham, while Martine Schindler wondered, “Are we even gonna recognise anyone?
“Bet everyone is going out walking and cycling in disguise today. No haircuts, nail extensions or beauty treatments, and overeating, but no exercise for six weeks…”
Some expats have however expressed annoyance at what they see as a flouting of the new regulations on going outdoors, which allow adults as well as children to go out for an hour’s walk or for exercise like running or cycling, but within specific time slots according to age.
Adults have from 6am to 10am and from 8pm to 11pm. Outings with children, which have been allowed since last Sunday, must now be between 12pm and 7pm.
The time slots for the over-70s and people who need to go out with a caregiver are 10am to 12pm and 7pm to 8pm.
Sally Jenner reported seeing a runner doing circuits from 5.35am until 7.45am. She said she was so upset by the regulation violation she felt like tipping a bucket of water over the runner from her balcony. Sally also reported seeing groups of up to nine people out together and in the road chatting to neighbours.
“Bad news for others sticking to the rules”, Sally commented.
“If there is not more control over their selfish actions we’ll all be back to square one”, she pointed out angrily.
There’s also the issue of where people are allowed to walk and exercise. In Mojacar Playa the seafront promenade reopened today, but the beaches remain closed.
Yet there are those who have ignored the prohibition on going onto the sand.


“Just a shame three people felt they had to go on the beach” Steve Ball said after his walk today.
“I hope the Guardia put them right.”