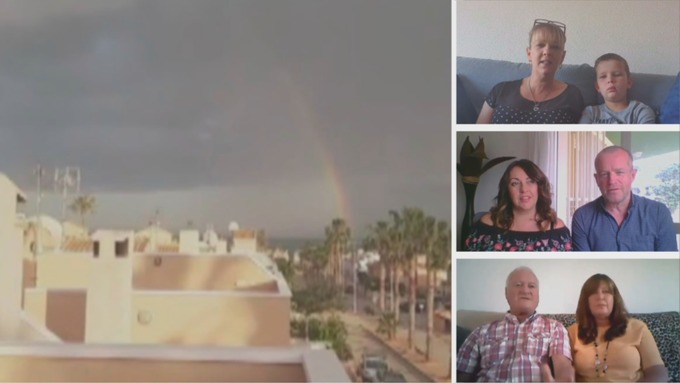 Expats in Spain’s Costa del Sol, Costa Blanca and Costa Calida have shared their experiences of lockdown in the sun with the nation as Spain begins de-escalation.

FOR the thousands of people from the UK who’ve settled in Spain, lockdown has meant much tougher restrictions than their friends and families at home.
It’s only been 24 hours since adults have been allowed to leave their homes for a walk or individual sport, and it was only last week under 14’s were able to have short breaks for exercise – but still under rigid guidelines that police continue to enforce.
Three ex-pat households revealed how this has affected them and how they have coped in a televised video interview with ITV news before yesterday’s confinement relief measures.
Kathleen and her son Jay relocated from Hampshire to Alicante, and Kathleen revealed her son has been her rock.
The mother and son have tried to have fun to pass the time, dressing up and doing karaoke.
But it hasn’t all been smiles.
“I can’t say there have not been hard times, because there has been, but I am certainly glad that we are in this together.”
Talking about their first venture out of home, Jay said the first thing he did was “go to the beach and walk in the water.”
And although they were looking forward to being able to leave the house after weeks of confinement, Kathleen admitted it was an anxious moment.
“As exciting as it was, we were really apprehensive, because your whole life has changed in six weeks.”
But what has helped them are the daily 8pm applause from their balcony.
“After we’ve done our cheer and applause, the police, fire or ambulance service drive past and wave at you all, so it’s a really nice community feeling.
“We’ve met people on their balconies we didn’t even know lived there.”
Paul and Marcus from Hastings, now live in Fuengirola on Spain’s Costa del Sol and revealed how Spain has enforced the State of Alarm measures.
“They are very strict here,” said Marcus.
“Police are patrolling the streets all the time, and there is a €600 fine. You have to carry documentation saying where you live so they can see if you are in the right place,” added Paula.
The couple joked their dog has become tired of them ensuring he gets to go out to do his daily business, as walking the dog has been one of the exemptions to staying indoors.
“We fight over the dog,” said Paula, adding: “He sits there saying ‘don’t walk me any more, I’ve had enough’.”
Marcus explained they could only walk their dog 150 metres or so from their home, and only separately, not as a couple or with their child.
But now they can go out once a day for a walk together…
“Or not,” they laughed, “we might be in therapy or marriage guidance.”
It seems many ex-pats have been keeping their spirits high during the lockdown.
Derek and Michelle moved from Newbury to Murcia on the Costa Calida, to start a new life, and they have nothing but praise for Spain’s approach to the pandemic and their local community.
Talking about the initial bulk buying when the State of Alarm was first announced, Derek said the problem was quickly dealt with.
“Typically Spanish, they were straight onto it, saying this is what you can have one of, this is what you can have two of. There were no shortages of loo roll where we are,” said Derek.
And when it comes to keeping themselves occupied, Michelle explained they have the perfect solution.
“Because we’re in the entertainment business, we’ve got a full PA system and blast out a few tunes (from the balcony).
“We all clap and they can hear it for miles around. Spanish and English all come together, so it’s brilliant.”
https://www.itv.com/news/meridian/2020-05-01/lockdown-in-the-sun-how-life-has-changed-for-the-south-s-expats-in-spain/