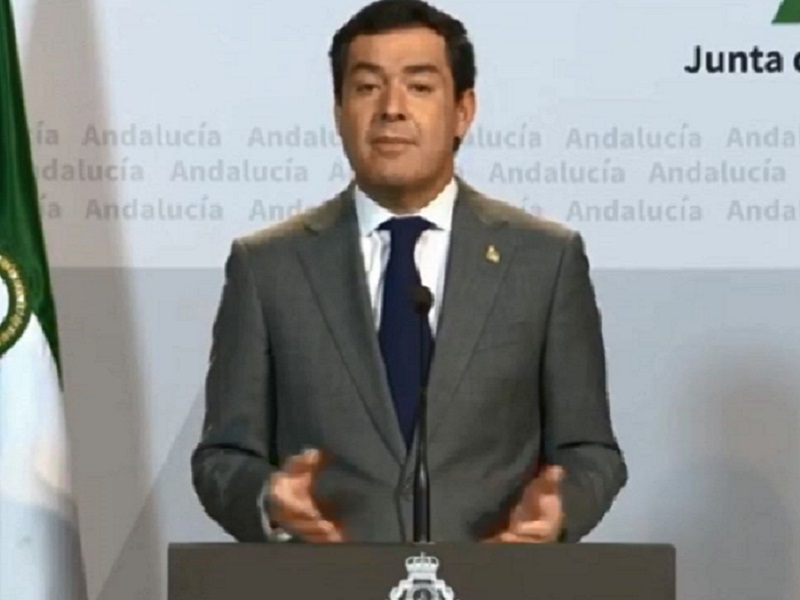 DEMAND: Moreno urged the Spanish goverment to approve the measure as soon as possible in order to combine the fight against Covid-19 with economic recovery CREDIT: Junta de Andalucía Facebook @juntainforma

THE Junta de Andalucia president has called on Spain’s government to apply a lifting of the lockdown in localities on the Costa del Sol and across the region with low rates of coronavirus contagion.
Juanma Moreno wants to see the enforced confinement eased in areas where new Covid-19 contagions are less than 10 cases for every 100,000 inhabitants over a two-week period.
Moreno defended the proposal following Sunday’s weekly video conference meeting with Prime Minister Pedro Sanchez and the leaders of the country’s autonomous community administrations.
He said the experts the Junta works with see it as “prudent and exacting,” as it would be based on scientific criteria. He also compared the idea to what he considered a “lack of clarity” from the national government on the issue.
According to the Junta head, 25 out of Andalucia’s 33 health districts currently meet the criteria. He therefore urged Sanchez’s government to approve the measure as soon as possible in order to combine the fight against Covid-19 with economic recovery.
He also said Almeria and Huelva provinces have a “notable” advantage in regard to easing the State of Alarm confinement.
On the matter of opening up beaches, Moreno is of the opinion “they have to open, but with the necessary guarantees,” and said he would be pushing for this in forthcoming meetings with the Spanish government.
He recognised that “the beaches are not going to be able to be as we have seen in other years, with a lot of people, but from not being able to open there is a middle way.”
He said he believed they would reopen, but it would have to be carried out sensibly.
The Junta president also asked central government to make the time slots for people to go out for walks to exercise more flexible, especially where the elderly are concerned and given the high temperatures experienced the region this week.
Moreno maintained Andalucia has been “exemplary” under the enforced lockdown to control the spread of coronavirus, and asked for the same approach to the de-escalation.
“If we do it well, our health will be protected and also that of our economy,” he commented.
“Our future as a society lies also in the use we now make of the freedom of movement, which we are going to get back little by little.”