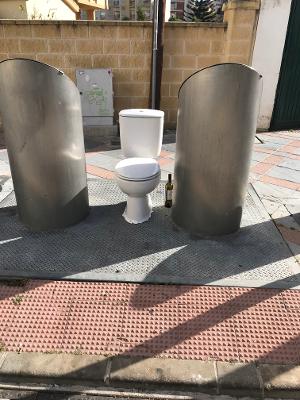 A phantom toilet flinger is bringing hilarious delight to residents on Spain’s Costa del Sol and refuse collectors, but the police aren’t impressed

Whilst the UK has ‘Banksy’ it seems the Costa del Sol has ‘Crapper’ as a phantom toilet flinger is striking across the Costa del Sol laying out pieces of ‘art’ which is causing hysterics amongst residents who are finally allowed back to the streets, the flinging of toilets is causing much laughter on social media too.

The ‘phantom’ is laying out his or her trade mark across the Costa del Sol as he places a toilet next to an empty bottle of wine and each toilet has a joke in it written on a piece of toilet paper, rather like a Christmas cracker.

Several have been spotted across Benalmadena and Fuengirola and as far as Marbella.

“Someone’s having some fun, each one has a note in it when you lift the lid, I’ve seen three so far but I see on social media they are appearing other places too. When I saw the first one I just laughed and thought it was an old bog at the bins, but when I saw the other two in identical positions next to bins with a bottle of empty wine next to them I got intrigued and thought ‘hang on’ – I lifted the lid as the toilet looked new and there was a note inside the second sighting saying ‘Can you dunnie believe it’ and the third one had the message ‘Isn’t it excreting to be outside.’

“I had to go back to the first one I had seen in the back streets of Torreblanca to see what the note said in that one, but it was gone so I bet the bin men had a laugh.”

Adam White also told the world how he had seen one in Marbella as he said on Facebook “I couldn’t believe my eyes, there it was, exactly the same as the ones going around on Facebook in the groups, it’s hilarious, I opened the lid and yes there was a note that said “I’m on the runs” – someone’s having a right giggle here, laying these out, it’s more of a mystery than the corn field circles!”

This morning we spoke to the bin collectors who also have been seeing the funny side, who said “We haven’t come across one as yet on our rounds, but our associate called on his mobile to tell us he had found one by the Las Arenas hotel in Benalmadena – it’s the talk of the depot, but our manager has reported it to the police and I don’t think they are seeing the funny side as they are according to our manager seeking someone clearly going out of area zones.”

Jason Thorne from Carvajal told the EWN “What a laugh after all this time it’s great to have such a laugh, never mind Pokemon we have can search Crappers,” he laughed.

Tommy Taylor said “Obviously it’s some builders or plumbers having fun, but I would love to know who they are, it’s hilarious and got so many people laughing and smiling, if we find out who they are, I want to buy them a pint!”