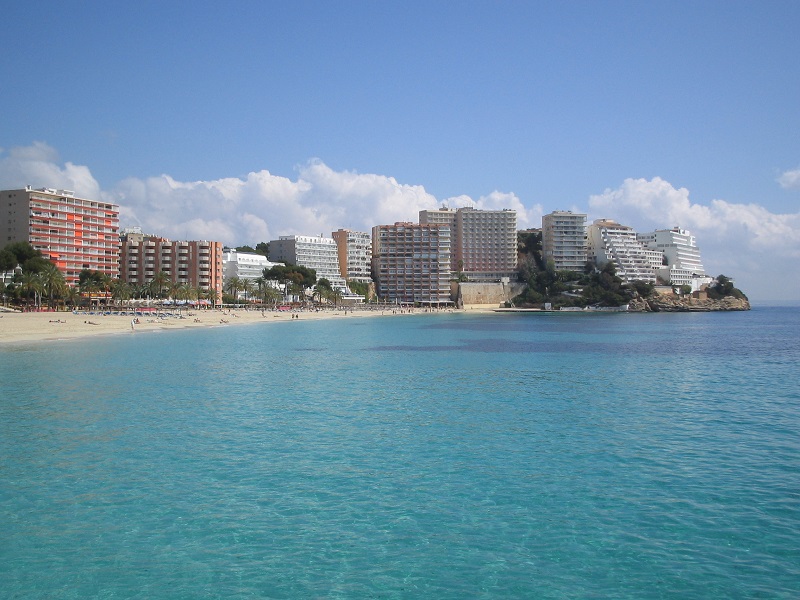 NOT ENOUGH: Local and national tourists alone will be “insufficient”, the Magaluf and Palmanova hotel association president said CREDIT: es.wikipedia.org

HOTELS in Mallorca’s popular resorts Magaluf and Palmanova will not be reopening for business until flights start bringing in tourists once more.
“Recovering activity without air connectivity or security protocols endorsed by the health authorities is impossible,” the area’s hotel association president Mauricio Carballeda told Spanish press.
Hotels are allowed to open under Phase one of the lockdown de-escalation, which comes into force next Monday May 11, although communal areas must remain sealed off.
Carballeda said there was no way local tourism would bring up hotel occupation levels to a level which would make opening the doors worthwhile, and that even when visitors from the Spanish mainland are allowed into the islands, this would still be “insufficient.”
Both destinations are usually teeming with foreign fun and sunseekers, especially from Germany and the UK. But there is still no date for when the Balearic Islands’ airports will reopen to international flights.
On top of that, Germany has only recently extended its strict worldwide travel warning for its citizens to mid-June, while the UK remains firmly under lockdown.
Just today Britain’s coronavirus toll became the highest in Europe.
Carballeda pointed out that the Balearics are a “clear disadvantage” in relation to holiday hotspots on the Spanish mainland, the very fact of being islands likely to “weigh down” recovery from the Covid-19 crisis.
“Tourists want to travel,” the association president commented, but said for now reservations were just coming in in dribs and drabs.
The main task ahead of the sector for now, according to Carballeda, is establishing protocols which “provide security for tourists.”
He wants to see procedures which are standardised, clear and the same across the European Union.
“We want to open,” Carballeda stressed during a radio interview on Monday.
But he called for the maintenance of ERTE temporary suspensions of job contracts, for low productivity, rather than force majeure, and “a joint public-private plan to come out of this.”
Without these measures it is, he said, “going to be very hard for the islands.”