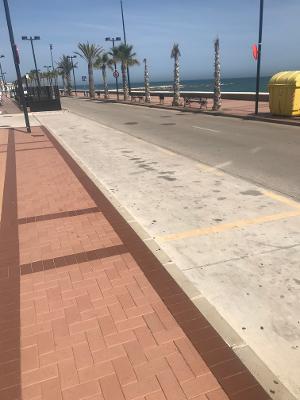 A man who claimed he was stranded in his motorhome and resembled Spain’s Costa del Sol as a Police State has moved on from his spot after nine weeks.

AS we reported yesterday on www.euroweeklynews.com a man who claimed he was stranded on the sea front on the Costa del Sol and being treated badly by the police if he left his boiling hot motorhome to sit on a bench was not a happy man citing the the Costa del Sol as becoming like a “Police State.”

The article brought the motorhome man from the Midlands UK stinging criticism from readers on social media as well as some calling our news desk too.

Tim Rosevear questioned “Euro Tunnel is open, I don’t see any problem driving back to the UK, there is also a list of hostels on the internet that are open for lorry drivers so you can park up there at night.”

Whilst Sonia Warren told him basically to stop moaning, “Stop moaning! The rules are there for very good reasons, why should you be an exception??? 😡”

Bill Stewart pointed out “The border has remained open for returning home, provided that it is to your UK main residence. The only way back is via France and the tunnel, but still doable as have a number of people I know.”

Dave Sproson commented “They have a job to do to stop the virus from spreading. You can get a pass and get back to the UK. GO and let the police do their job, which they are doing very well,” as he supported the police doing their job.

Alan Howard had no sympathy at all as he said “At least you have the sun, beach and sea to watch in a big open space around you unlike some couped up in tiny flats with maybe a child to look after.”

Listening to our valued reader Steve Paul who requested “EWN why have you not asked him why he does not drive his motorhome up to the Euro Tunnel and go back to the UK? No need to wait for ferries to start sailing again.” We decided to go and see motorhome man and pose the question, but on arrival all we found was the empty space he had parked in and the only trace of him was the oil patch left behind.

Local resident Tim Caines who lives in a nearby apartment came over to ask what we were taking photos of and we asked where the motorhome had gone, to which he replied “He’s moved on, he took some stick on social media and said enough is enough, he’s a really nice bloke and the reason he parks here is as Kev the landlord of the Red Dragon leaves the wifi on for him to use, even though obviously the bar is shut, I was chatting to him every morning but the police were winding him up and then when he saw all the comments he told me he was moving on, to be fair he’s a laid back care free man – I look forward to seeing him next year anyway when everyone has chilled out.

“He was waiting for ferry crossings to reopen from northern Spain, he didn’t want to drive through France or use the Tunnel, but it seems your readers have hounded him away now.”

“I guess that’s life on the road, come and go as you wish, I quite fancy it one day myself,” said Caines.

“He had his opinions, just like everyone else, but I do think your readers were a bit tough on him.”