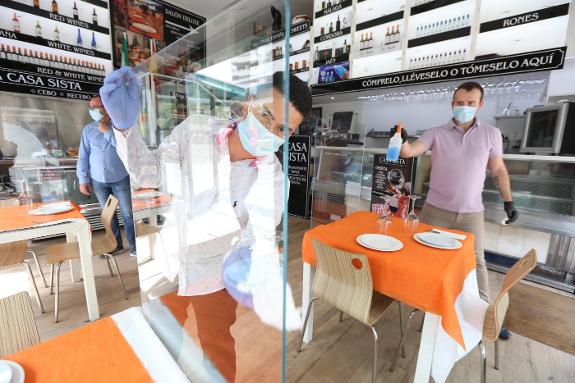 AS lockdown restrictions are eased on the Costa del Sol and the Costa Blanca Bar and Restaurant owners are having great difficulty in obtaining the plastic separator screens that enable customers to social distance themselves.

Distributors of the methacrylate (plastic perspex) screens are working full out supplying hotels and bars across Spain and demand is through the roof. Prices have more than doubled and in some cases trebled which is another hurdle business owners have to face before they can reopen.

At the moment these establishments are allowed to open with 50 per cent capacity and only on the terraces as if that wasn’t bad enough to be able to ensure customers do not pass on any infections, plastic separator screens look likely to be required between the tables. As always, please check with your local authority to be absolutely sure what you will need to be able to open again to the general public.

The heading picture is from a restaurant in Torremolinos which was the first one in the area to fit the plastic separators, they also have ionisers at the entrance in place.

Companies rush to the market place

The manager of the Sant Cugat company Aluminis SC, Raquel Llasera, says that in recent weeks the demand for methacrylate screens has tripled. “Many sectors began to take an interest in this material because it was initially cheaper than glass,” she says.

However, she also warns that it is increasingly difficult to find it in the Spanish market and says that the price “has skyrocketed.” Llasera has begun contacting producers in the south of France to see if they can supply them.

“We believe that as the easing of the restrictions moves forward, demand will soar even more,” Llasera points out, and she adds that it is “essential” that there are clear regulations on whether screens are mandatory, the material they should be made of, and their sizes.

Rosa Maria Permanyer, spokeswoman for the Disnou company in Castellar del Vallès says that since mid-April they have received an “exaggerated” number of orders and indicates that the demand for methacrylate has increased by 400 per cent.

While acknowledging that it would be best to have clear rules regulating the use of screens, she says shopkeepers and restaurateurs are not concerned. “They’re desperate to reopen and all they want is to put the screens up and be able to work,” she says.

At Barcelona’s Plastic Express, Joaquim Figueras says that at present there is enough material to meet demand, but he admits that the future is “very uncertain” and he points out that the material in Catalonia is beginning to become scarce.

This is why Metacrilat.com in Olot has about 50 customer orders on a waiting list, with the firm hoping to supply them as it receives more material. Manager Lluís Clavaguera explains that every day they receive about 15 calls enquiring or placing orders.

Metacrilat.com has plans to start making partitions with other materials, such as compact polychrome, which is harder but would still serve as protection, while Polimer Tecnic is looking at materials, such as polycarbonate or cellular polypropylene.

The Proycsa company in Valls already uses alternative materials. The firm, which manufactures industrial protections, has already exhausted all the polycarbonate it had in stock due to the demand for partitions.

Next door is the Jeatec workshop, specialising in industrial maintenance. Seeing that their work had gone down, the three partners – Eudald Coll, Jordi Campanera, and Antoni Campanera – decided to take the opportunity and also enter the screen business.

Proycsa supplies the parts to them and they finish and distribute them, especially to small local shops or offices. “The critical point now is the raw material. There is no way to find it and we have already lost some sales because of it,” says Coll.