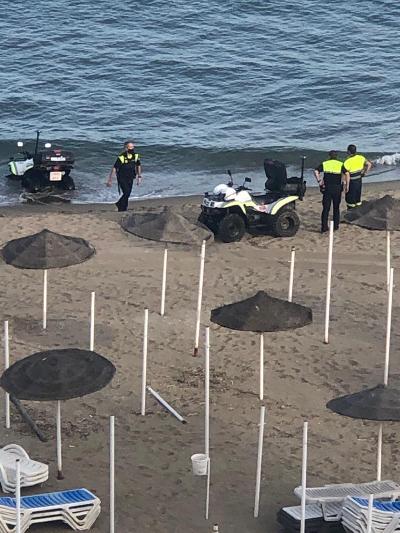 Cops bike takes a cooling off in the sea

WELL you couldn’t make up the goings on prior to the exercise allowed out time for the majority which has seen some crazy scenes this evening.

Firstly watchers from balconies preparing to go out for their window slot of exercise have been accustomed of late to police beach patrols on specialised quad bikes ridden across the golden sands.

The patrol bikes have been witnessed travelling at 40mph at times charging across the long beach and sometimes even more as the police surge up and down endorsing the regulations, but tonight one officer got a bit carried away as he ditched his patrol bike into the blue waters of Fuengirola as he zoomed across the beach.

The red faced beach patrol officers had to radio assistance as support arrived as more officers arrived as well as the Grúa who had to lay out a long line to winch the bike out of the waters.

With the arrival of more cops to the scene, the attraction brought great laughter as crowds surrounded the area to watch, but police checked their watches and started issuing fines to the watchers for being out too early.

As the officers issued the fines, other officers with the assistance of the Grúa started to winch the bike out.

Winching out the bike took over an hour as officers had to assist the winch, but by this time the legal crowds had gathered in fits of laughter.

The ‘drowned’ bike then eventually reached the recovery truck to the delight and laughter of the crowds, but the embarrassment of the police was clear to see as they blocked the road off.

“Sorry but I couldn’t stop laughing, those cops have been buzzing up and down the beach as if they are in somewhere like California, to watch him land up in the sea was hilarious, I just couldn’t stop laughing, just the same as the crowd that gathered, but it was a bit harsh to fine them really I think, they drew people out early to watch in essence, I bet that cop’s going to get some stick at the station, all that salt water is bound to have seized the engine!”