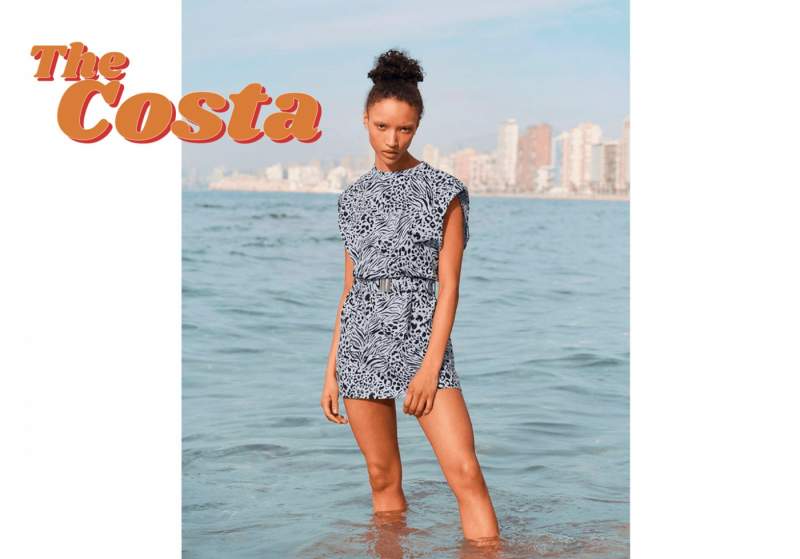 Spanish fashion chain Bershka chose Benidorm on the Costa Blanca for its new spring campaign ‘The Costa,’ a promotion shot when you could still go to the beach just a fortnight before lockdown.

THE company, whose clothes are aimed at a young target market, has more than 1,000 stores in 71 countries around the world, and selected the popular holiday resort as the stage for its summer collection.
Filming was done a fortnight before State of Alarm in Spain, for ‘The Costa’ spring collection.
Images shows different points of the town, with the beach a prominent feature. Some show sunbathers lapping up the rays – a sight that hasn’t been seen for many weeks.
A team of 25 spent two days in Benidorm in February during which time photographer Benjamin Vnuk snapped model Georgia Palmer in some of the town’s most attractive spots.
Valencian production company Motif Management was behind the shoot, reportedly using ‘Benidorm’s skyscrapers on many occasions.’
The Levante beach and promenade features most heavily in the campaign, but shots were also taken at the Hotel Deloix and in the car park of a Servigroup establishment.
Spanish press reports claim a reported €10,000 was spent on hotels and hospitality in the town over the two days, and the publicity as a result can only be a positive for Benidorm.
El Corte Inglés and H&M collections have featured the charms of the town in previous years.
According to Benidorm Film Office, Bershka, which is part of the Spanish Inditex Group, chose the town for its 2020 collection “at a time when it was most involved in large productions.”
On the same two days, shooting was also taking place for a new series for Atresmedia,  as well as two films, “a whole selection of productions that will see the light little by little.”