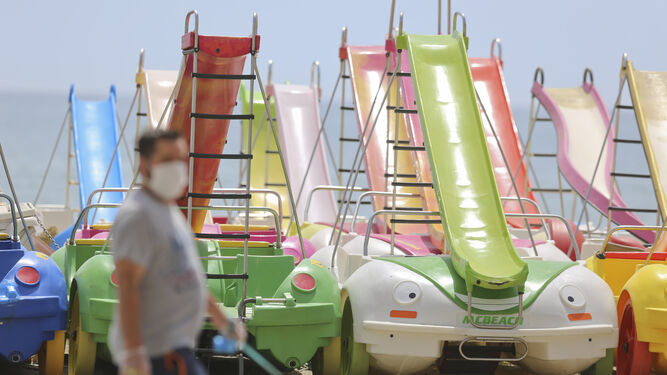 Hotel Industry: Costa del Sol is relying on residential tourism to give them a vote of confidence abroad and spearhead its recovery. Credit: ALBIÑANA

Experts in the hospitality industry hope that residential tourism will act as a ‘spearhead’ in improving the dire situation of the tourism industry in Spain, since they consider these visitors to be ‘ambassadors’ of Malaga and what it has to offer.

THIS was highlighted by the director of the five-star Grand Luxury Hotel Arantana Villa Padierna Palace, Jorge Manzur, who participated as a speaker in the #WeWillAriseSupported (#SaldremosReforzados) telematic forum, organised by the Les Roches hotel management school, in which they gave their vision of the current situation to other managers.

“There are people who do not want to travel and who are afraid, but there are also many people especially in this area who have their second homes here and who are crazy to come, English and Spanish. This is going to be the spearhead for everything to start working again, when these people see that everything works and spread the word, everything is going to improve,” said Manzur about residential tourism.

Carlos Díez de la Lastra, moderator of the event and director of Les Roches, also expressed this notion and highlighted the importance of residential tourism in recovering the “confidence” of visitors, mainly international visitors. “They are a motivating example of the tourist movement… they are a very important spokesperson that can generate tranquility” and pass on the message to others abroad.

This same vision is shared by the president of the Association of Hotel Entrepreneurs of the Costa del Sol (AEHCOS), Luis Callejón, who has considered that “residents are the apostles or ambassadors of the Costa del Sol…, what they do when they arrive here and they begin to send photos of the situation, of the tranquility, will spread the positive news to different countries” always when respecting sanitary control.

The general feeling amongst hoteliers is one of pessimism about the future in the short and medium term, and most have pointed to ‘July’ as the date for the possible opening of establishments.

“The situation is bad and there are many uncertainties,” said the director of the hotel Vincci Selección Posada del Patio, Jorge Castellví, who has been “more optimistic” about the long term when there will be “more clarity in mobility, transport and the possibility of greater security.” Even so, in relation to the international clientele, he has considered that “until people can travel, business will be zero or very small.”

The hoteliers are considering various scenarios depending on the “financial capacity” of bearing the “costs” of opening again. He clarified that “the number of establishments who do not want to open because they are not going to have enough clients and we do not have the tools for what lies ahead.” He also highlighted the importance of “technology” in terms of marketing and assured that “this industry is going to change brutally,” he has pointed out that they should ask customers “what kind of establishments they want for their holidays.”

Adversely, he highlighted that the association is managing expectations which consider that “25 per cent of hotel establishments will not reopen because they do not have the possibility to attract those clients in time to save themselves from the bumpy road ahead.”

At the Vincci establishment, they predict that the summer season will be delayed “from June, July, and August to September, October, and November” so they hope to register around 45 per cent to 50 per cent capacity at the end of the year, however, that is looking at things optimistically.

Health was also a central topic addressed at the forum, where Rocio Galan, the director of the Meliá Don Pepe hotel, stood out for emphasising the protocols which the hotel chain has decided to adopt which is based on the Chinese experience of dealing with Covid-19.

In this regard the Chinese “return to normality” began “with very strict measures and little by little they were relaxed,” she explains. They also touched upon creating a certificate which confirms the establishment is “covid-free” however, hoteliers have been reluctant to do this especially as these are issued by regions.

Manzur has considered this protocol to be “unrealistic,” as “there is no vaccine,” whilst Castellví has ​​noted that “this certificate will be made when we have a vaccine or medicine.” So equipped to deal with the virus.

Callejón has not been a supporter of this because he argues, “I can have my hotel disinfected, but I do not have sanitary control of all the people who pass through the establishment,” in relation to its workers, suppliers, and clients.