BREAKING NEWS: Spain’s Government approves territories that can move to Phase 1 of de-escalation lifting restrictions for 51% of its population – here’s the complete list 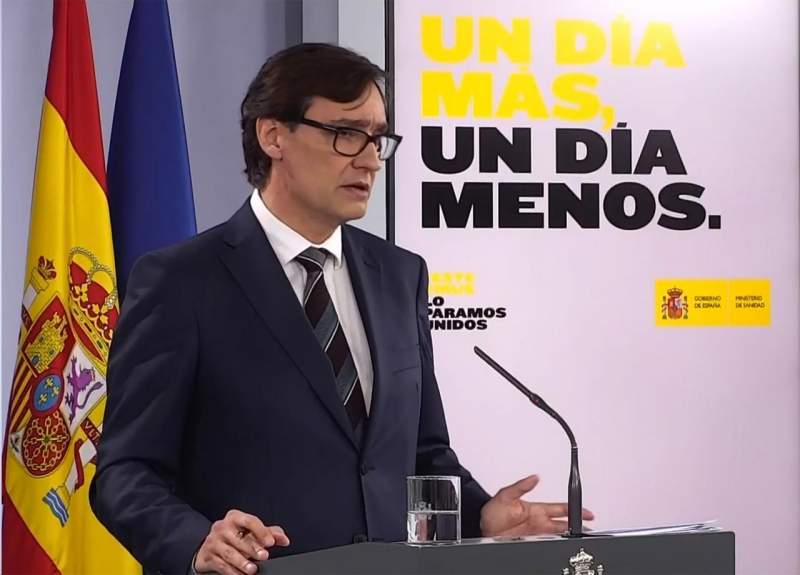 Health Minister Salvador Illa has reassured the nation that the Government has no intention of bringing back the State of Alarm. CREDIT: Ministry of Health

Spain’s Health Minister Salvador Illa has announced exactly which regions and provinces can now move to Phase 1 of de-escalation phase on Monday May 11, resulting in lockdown restrictions being relaxed for around 51 per cent of Spain’s residents.

Ten health districts of Valencia, three of Catalonia’s regions (Ebre, High Pyrenees and Aran and Tarragona), as well as around 26 smaller rural areas of de Castilla and León can also move to Phase 1.

However, for now Madrid, Barcelona, Malaga and Granada, among others have been denied permission to move to Phase 1 of de-escalation because they haven’t yet met the government’s Covid-19 health markers. For now its citizens and businesses will have to continue to respect the rules restricted to Phase 0, which means that no bars/restaurants can open their doors to the public yet. Businesses that have been allowed to open in Phase 0, must also continue to serve by ‘appointment only.’

Those provinces entering in Phase 1, however, will have more restrictions lifted, allowing social gatherings of up to 10 people, as long as social distancing measures can be guaranteed. In Phase 1, businesses can serve customers with safety measures in places. For example, cafes, bars and restaurant terraces can open 50 per cent of terrace capacity to customers. Hotels and tourist accommodation can also open so long as they keep common areas, such as dining/buffet areas closed.

Places of worship may also open at 30 per cent capacity and funeral services may be held with a limited number of mourners. Cultural events involving under 30 people can be held indoors at a third of capacity, and outdoor cultural events can entertain up to 200 people (seated). Museums may open also open at a third of capacity. Non-professional sports are also allowed in Phase 1 for activities that do not involve physical contact or the use of changing rooms. Outdoor markets may also operate so long as stands are spaced apart.

Here’s the complete list of the provinces that can move to Phase 1 by region:

Ibiza, Menorca and Mallorca. Formentera is already in Phase 1 (since Monday May 4).

A Coruña, Lugo, Orense and Pontevedra.