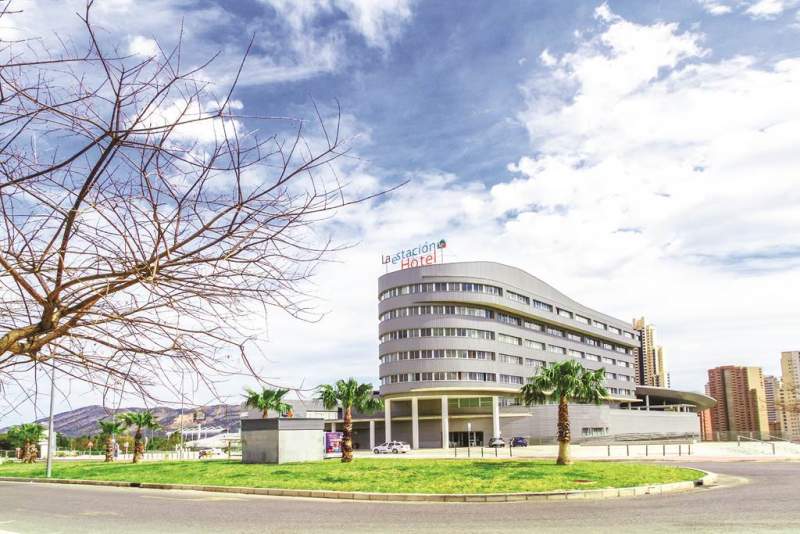 THE venues are in three of the region’s favourite destinations  – Benidorm, Alicante and Elche.
Though initially, clients will be workers in need of accommodation, with tourists not expected until the end of June at the earliest.
In the case of Benidorm, the Spanish destination with the most hotel beds after Madrid and Barcelona, La Estación Hotel will be the first to take guests in the resort.
The four-star venue, owned by the Poseidon group, and located close to the bus station, posted: “(We are) one step closer to seeing each other. From May 18, we are waiting for you at the Hotel La Estación.”
In Alicante City, the three-star Hotel Campaniles will resume activity from Monday, Monday, 11.
Unlike the Campanile, which will open completely, the Hostal Savoy in Alcoy plans to recover part of its activity.
The three-storey establishment, which was assigned as a medicalised hotel for healthcare personnel, plans to open one of its floors for commercial use.
Among the rest of Alicante’s hotel association APHA members, only a handful of other establishments with a reduced number of rooms, such as the Hotel Ibis in Alicante, are considering the possibility of opening in the middle of next week.
In Elche, the only hotel that has confirmed it will open on Monday is the three-star Hotel Tryp, located in the heart of the city.
With six floors and 66 rooms, it plans to initially open with just six of its 20 members of staff.
The Pensimar hostel in El Altet, with two stars and located 1.5km from the beaches of Arenales del Sol and El Altet, will also be open in the next couple of weeks.
Toni Mayor, President of the Valencia Community hotel industry association (Hosbec), said it is a “timid response” to the first phase of de-escalation, with many hotels having been closed since early March.
Hosbec’s General Secretary, Nuria Montes, explained that initially, “due to the numerous restrictions to open, among other things, without being able to use the common areas, the work is framed in providing service to workers who need accommodation.”
“The goal of providing for tourism is not expected to be until late June or early July,” she added.
During a meeting with the President of the Generalitat Valenciana, Ximo Puig, the associations said they are “satisfied” with the work they are doing to defend the sector in “each and every one of the forums in which they participate, both national and European.”
One of these measures is pushing for (ERTE) in the tourism sector to be extended for six months once the State of Alarm is over.
Mayor also “insisted on the need for Europe to be more united than ever.” He called for a European protocol for tourism to avoid “protectionism.”
Montes referenced leaders who are “asking their citizens to spend their holidays without leaving their own country,” the most recent being France.
Finally, they said that in order to reopen the sector properly, they need “clear and safe criteria of action, which allow a good experience for tourists.”