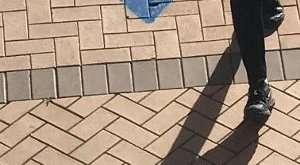 This morning on Spain’s Costa del Sol Civil Protection officers are chasing those who are not following the mayor’s order to follow the blue arrows whilst residents also turn on those who disobey.

THE blue arrows designed and laid out to give everybody in Spain’s Fuengirola more safety whilst out during exercise hours have caused issues amongst residents this morning with one argument turning into a fist fight, although it was deemed handbags at 10 paces by local walker Mike Wilkins.

“Why can’t people follow a bloody big blue arrow?” he asked “Look at them pair going for it” he shouted as two men in their mid 50’s squared up to each other arguing and pointing at an arrow after it appeared they bumped into each other before throwing punches.

The town hall have sent out Civil Protection officers now in high viz orange jackets to chase people down who are walking clearly in the wrong direction, they spot a blue arrow directional flouter and literally run down the pavement and tap the offender on the shoulder pointing at the huge big blue arrows and ordering them to cross the road or walk the other way.

One volunteer Civil Protection officer told the Euro Weekly News “If they don’t listen or follow our orders then we are instructed to call the police, the town hall has made it clear, the blue arrows are very clear, there is no reason to ignore them, its for everybody’s safety.

“I haven’t called the police yet as everyone has taken notice and done as I have told them, but a colleague further up the front has due to getting abused.”

Walker Jayne Arnold who was going the right way was not a happy walker at all as she was shouting at people “Oi there’s a big bloody blue arrow there, do you know what an arrow means?” Jayne was shouting at everyone she could before pausing for breath to tell us “How thick can some people really be? I’ve had a guts full, if we can’t follow a blue arrow what the hell is it going to be like if we reach Phase one? We will have no chance that’s what.”

Although another walker with his sausage dog, Jimmy Davies pointed out, “At least the graffiti artists are going in the right direction it seems,” as he pointed to an arrow.

“Although this is a serious issue, it’s not funny really is it, personally I feel the police need to be stronger and start arresting people on the spot if walking the wrong way.”