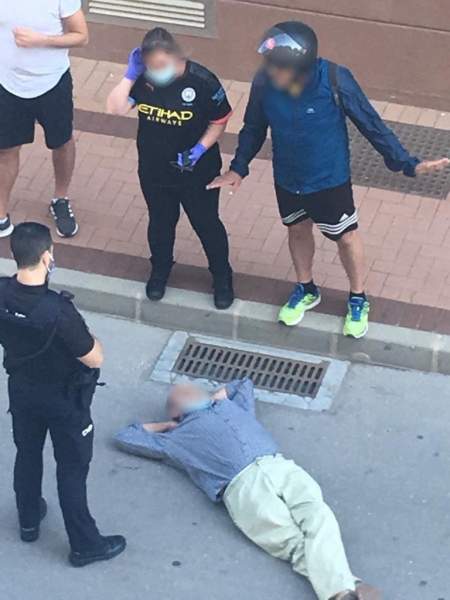 Slumbered in the road without a care in the world

As residents on Spain’s Costa del Sol were released from total lockdown onto Phase one after surviving the coronavirus quite a few contracted Drunkavirus today.

AS bars opened early this morning conforming to the new regulations the streets on Spain’s Costa soon filled with people celebrating the release from Phase 0 into Phase 1.

Many hit the bars for the odd beer or two after 11 weeks of lockdown, but by the afternoon for some it took its toll and the police were inundated with calls of drunks causing problems or shall we say being in trouble themselves and not being able to make the walk home.

One Spanish man was totally the worse for wear as he collapsed in the middle of the road as his legs went from underneath him as cars screeched to a halt to avoid the body lying in the road, causing a tail gate car crash.

As he sprawled in the road with officers around him, he looked as if he didn’t have a care in the world.

Eventually he sat up and begged with the police not to arrest him.

They eventually got him up and led him to the safety of the pavement and sat him on a chair to await for an ambulance, but as the ambulance arrived the legless man refused to get in it, so the officers left him again to his own devices to stagger home. Amazingly he walked or should we say staggered up the middle of the road just avoiding even more traffic.

The police said they have been inundated with calls today for assistance, although it’s been more of a case of assisting people home after a few too many drinks, the officer told the Euro Weekly News reporter on the scene “It’s mainly been in hi jinx rather than problematic, we have only made one actual arrest for bad drunken behaviour.

“The more serious issues today have been people forgetting that roads are busy again and blatantly walking into the road and we have had a few incidents with people being struck by cars along the coast, but nothing thankfully serious, but people need to remember the traffic is back to normal.”

Although witness to the scene of the man lying in the road Stephanie Boole who aided the man and wasn’t that impressed but did manage a joke as she said “It looks like we have got rid of the Coronavirus and now have a new one called Drunkavirus.”