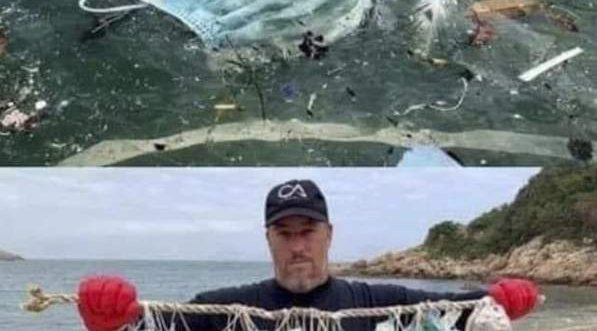 Residents and expats are concerned that face masks could pollute Spain's beaches and oceans as is already the case in Asia. PHOTO CREDIT: OceansAsia

Expats across Spain have expressed concerns that ‘obligatory use of face masks in public spaces,’ as announced by the government yesterday (as reported), could lead to the type of pollution problems already being experienced in many parts of Asia.

SOCIAL media is full of images of carelessly discarded gloves and face masks littering not just streets and car parks, but also beaches and oceans across the world. Many masks are made of plastic polypropylene, which is not easily biodegradable, and are already polluting the oceans and are now being washed up on beaches.

In fact, just a few weeks ago, conservation group OceansAsia Co-founder Gary Stokes reported finding dozens of surgical masks scattered on Hong Kong beaches as they conducted a year-long research project into marine debris and micro-plastics (as demonstrated in the photo above). According to Stokes, “The way I see these masks in the environment is just another addition to the ever-growing marine debris crisis our oceans are facing,” adding that they simply “shouldn’t be there in the first place.”

Expats, particularly across the country’s Costas, are concerned that Spain’s beaches and oceans may well experience similar pollutions problems, given that the government yesterday announced that the use of face masks will be made obligatory for public spaces across the country.

Commenting on face masks potentially being washed up on Spain’s beaches, like in Asia, Kevin Lloyd of La Cala on the Costa del Sol, stated: “I’m concerned we will see this kind of action in Europe as it comes out of lockdown. Why do humans cause more environmental issues? We are becoming a virus amongst ourselves. Have we not learnt enough already?”

Miles Lammerton from Torreblanca near Fuengirola also said he hoped that Spain’s beaches and oceans will not suffer a similar fate to Asia, adding that: “Who ever throws them in the sea is human trash.”