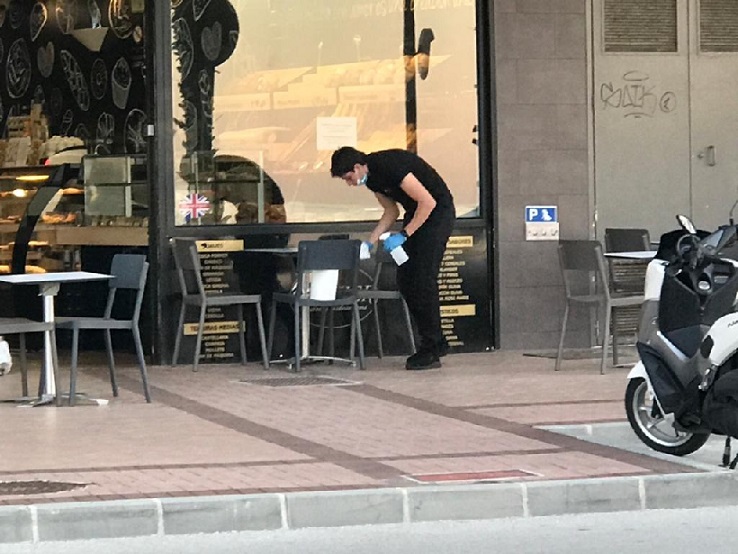 As residents of Spain’s Costa del Sol welcomed in a new dawn today bar and restaurant owners along the coast are wondering just how they are going to manage in these tough times.

THE paseo in Fuengirola buzzed into action at 7am this morning with the many bars and cafes pulling the shutters up for the first time in just over eight weeks.

Waiters wearing protective masks were seen cleaning down tables with disinfectant and there was a steady line to the rubbish bins which were quickly overloaded by eager staff thankful to be back at work at last. But, what will ‘work’ be like in this new Phase 1?

Straight away it was noticeable that the terraces have been slimmed down to at least half of their capacity with some of the smaller bars left with just five, without being able to allow customers inside its questionable whether it is even financially viable to open.

There were definitely fewer waiters too, some obviously preferring, or asked, to stay furloughed until things pick up. The new rules are also in place, space between customers, only one person allowed to use the toilets at any one time and then they are to be immediately cleaned after use, tables cleaned before and after use and no table cloths, and a complete disinfection three times a day!

No meetings of more than 10 people in a group was another rule, just how waiters would know who is in a group or just friends remains to be seen. The over 70’s apparently have to have their own allotted time, its hard to see how that will pan out, with terraces so small anyway how is it possible to reserve a ‘place in the corner’ for someone that might not come in anyway?

It certainly is going to be a ‘Manic Monday,’ please check back later as there will be another report on just how the day went and what the future holds for Fuengirola.