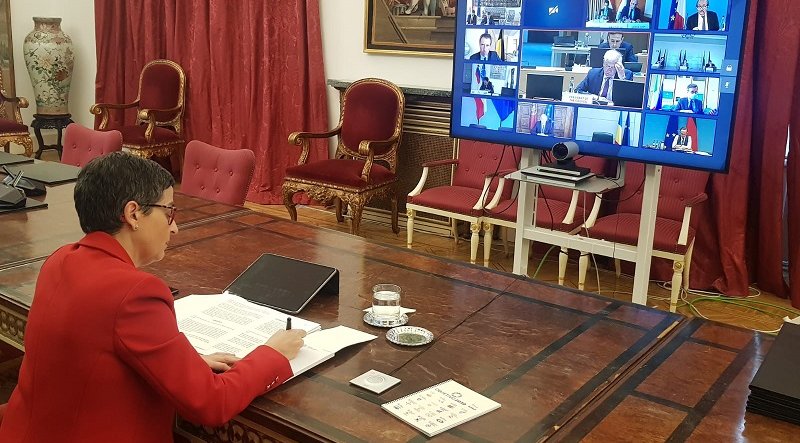 ILLOGICAL: The Foreign Minister said it would not make sense to allow freedom of entry to foreigners before the Spanish are allowed to move around the country. CREDIT: Exteriores Twitter @MAECgob

THERE is no firm date for reopening Spain’s borders to foreign tourism, the Foreign Minister says.

What’s more, borders to international visitors could open in some regions before others, Arancha Gonzalez Laya revealed.

The Balearic Islands and the Canaries, where the coronavirus pandemic is more under control than in other parts of the country, and whose economies depend heavily on the tourism sector, could be first.

“At the end of June, if all goes well, the Spanish will be able to move around Spanish territory. It would be a little illogical to allow the entry of foreigners who can freely circulate around Spain when the Spanish can’t do so,” the minister commented in a TV interview on Sunday night.

“For the moment we have not set a specific date to reopen our frontiers. However we know that when we do we want to do so in conditions of safety for those who want to enter Spain, but also for Spanish citizens within our territory,” Gonzalaz Laya explained.

The minister said that once the coronavirus situation is under control in Spain “we will be willing to gradually open our borders to freedom of moment, with our European neighbours first.

“We are opting to set objectives in a way which is closer to each time, observing the epidemiological figures and the construction of health service capacities, which is what is going to allow us to open safety,” she affirmed.

Questioned as to whether there is coordination with other EU countries on border re-openings, Gonzalez said there is, but added, “the advance of Covid-19 is different in each country, hence the dates cannot be the same.

“Where there is a desire for greater coordination, is not on when to open borders, but how we are going to do so and what kind of information and requirements we are going to ask of those who travel.”

Asked about Spain’s coronavirus crisis-battered tourism industry, Gonzalez Laya said she understands that it “is very important for our country,” but added, “that is why we want to give out the message that the more responsible we are now and the more we fight together to beat the curve, the sooner we will be able to open areas to the freedom of movement of people and tourists.”