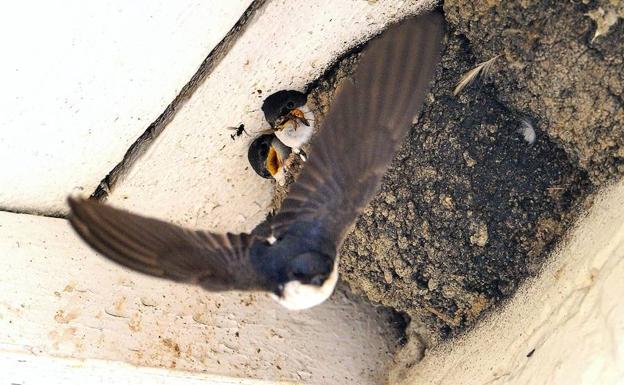 ARMED with a broom, the woman was filmed by a neighbour wrecking swallow nests during the dead of night, footage which has been passed to the Guardia Civil which has launched an investigation.
The Nature Protection Service (Seprona) of the Guardia Civil is handling the case after receiving a complaint from a resident Daya Nueva in the Vega Baja del Segura region, accompanied by a video recorded on a mobile phone.

The images, which have been shared to social media, show the woman, around 50 years old with a cigarette hanging from her mouth, repeatedly hitting swallow’s nests outside her home.
And she now faces a fine of between €5,000 and €200,000.

In one of the first alleged criminal incidents – a crime because it was an attack on protected species – ‘Isaías’ who filmed the video, told El Periodico de Alicante, he was taking out his rubbish when he saw ‘the heartbreaking image of a woman destroying 50 swallow’s nests with a broom handle.’
In the video, the young man can be heard reproaching the woman and reminded her they are a protected species.
She carries on regardless claiming she is simply cleaning her property and the pavement.
The following morning, the the street was reportedly covered with the remains of the nests, including several broken eggs and dead young swallows, explained journalist Ibon Pérez in a post on his Twitter account (above).
Nature conservation organisations, such as SEO BirdLife remind that swallows, among other species, are ‘explicitly protected,’ and that destroying nests is illegal.

The Guardia Civil posts regular reminders on its Twitter account that offenders will be prosecuted.
Spanish legislation (Royal Decree 139/2011) and European legislation (Birds Directive 2009/147/EC) “condemn as a serious offence the causing of any kind of damage to birds such as swallows, which are strictly protected by law, and to their nests: whether they are occupied or not. The sanction foreseen for demolishing nests of any species of swallow is a fine of up to €200,000.”