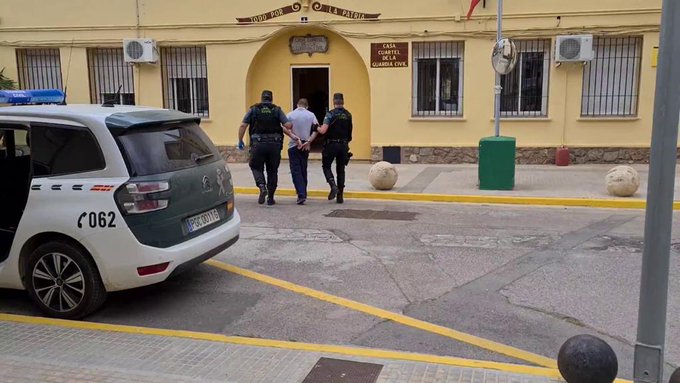 A YouTuber is being held in Valencia on Spain’s Costa Blanca on suspicion of hate crimes, harassment and drug trafficking among other crimes.

THE Guardia Civil arrested the 38-year-old man in Sagunto, Valencia, for his alleged involvement in hate crimes, threats, harassment, drug trafficking, crimes against moral integrity and for allegedly broadcasting xenophobic speeches against groups and ethnic minorities through his Internet channel.
He is also accused of harassing and threatening members of political parties and police.

According to a statement by the Armed Institute, Operation Horde was launched following a complaint.
The detainee, who referred to himself as ‘sheriff’ on social networks, was reportedly arrested last week for threatening to stab a victim of his alleged harassment. Fortunately they were able to escape.
The statement said officer had to carry out “intense police work” to gather sufficient documentary evidence to clarify who was responsible “due to the difficulty of the investigation and the serious social alarm” generated.
This included searching the suspects home and seizing computer material before arresting the YouTuber.
It is reported the detainee threatened a victim in one of the videos recovered, in which he showed a knife, and allegedly harassed the person “constantly,” through calls to his mobile and landline phone at home.
The Guardia Civil’s Telematic Crimes team in Sagunto has analysed the suspect’s YouTube channel, which he allegedly used to spread hate messages against ethnic minorities and groups.
He is said to have insulted and threatened various residents of neighbouring towns who belonged to different political parties and members of police force, vandalising their cars.
So far the telematic crimes team has analysed more than 200 video publications and is studying social networks.
The detainee and the proceedings have been transferred to the Court of First Instance and Instruction number 3 of Sagunto.