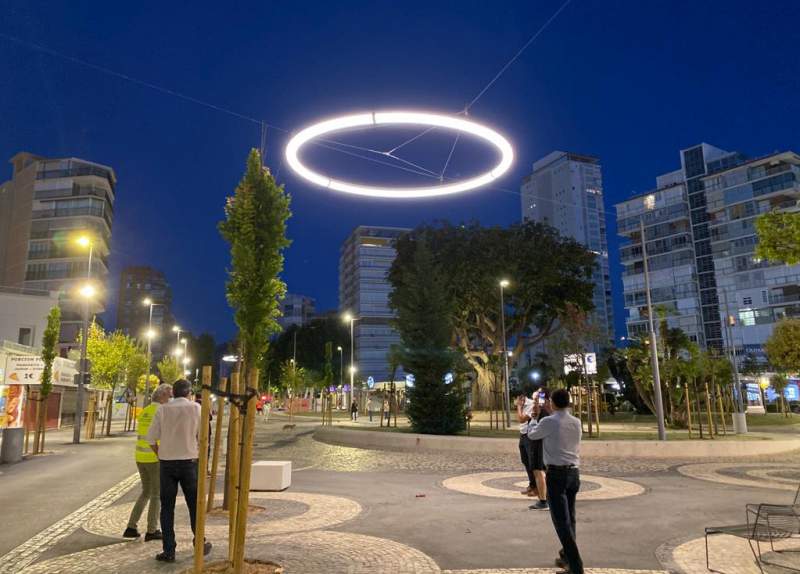 Benidorm on Spain’s Costa Blanca has revealed the first of its ‘exclusive and avante garde’ suspended urban lighting as it prepares for the ‘new now’.

THE new lights, four metres in diameter, have been designed by a Costa Blanca firm in Murcia, exclusively for Benidorm.
Mayor Toni Perez said “they regulate their light intensity and are totally efficient.”
Two of 20 planned street lights have already been installed in the Plaza de la Hispanidad.
And throughout June, the council and the company in charge of the remodelling of Avenida del Mediterráneo will install a further 70 to complete the refurbishment project.
As well as being energy efficient the main feature of the new lighting system is that they are suspended by steel cable.
Mayor, Toni Pérez, said: “In the planning of the new Avenida del Mediterráneo we were very ambitious and sought a design that was exclusive and avant garde, a characteristic that pervades the entire projected urban scene and logically also the luminaires that have the singularity of being suspended through steel cables that start from some columns, thus saving the treetops without losing light.”
He added: “The industrial development of these lights is 100 per cent Spanish, the work of an SME based in Murcia, NTE Sistemas.
“The design and configuration process has involved not only this company, but also the contracted construction company, the project management and the council.
According to the mayor, the lights are equipped with LED technology, “resulting in the municipal strategy of efficiency and energy savings.
“In addition, the power and light intensity are adjustable depending on the needs. In fact, in a test carried out yesterday a third of the power provided maximum intensity.”