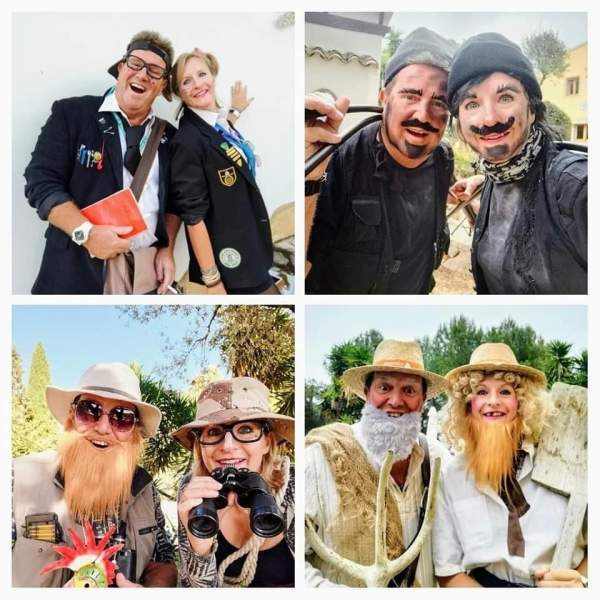 WITH the move into Phase 1 on May 11, Vall de Pop U3A members Jo and Pete Cleary brought their innings of 57 different costumes and different songs streamed online to an end on May 10, with a final performance as ‘themselves.’

Every day since March 15, the couple have put on their make-up and costumes and performed a different song to keep their friends and acquaintances entertained.

Vall de Pop U3A spokesman, Peter Sockett,said: “We have come to look forward to their lunchtime presentations, whatever are we going to do from now on?

“This is an incredible achievement which has involved them in lots of planning each day. Firstly – what new costume can they come up with, from whatever party props they have at home, or a scissors/needle/cotton can make up, cardboard cut-out noses, floor mops becoming hair – their imagination was incredible.

“Then the song to accompany the costume – must be practised as each day they were word/tune/note perfect.

“Finally, they set up the cameras to ensure every move was transmitted to their Facebook and YouTube audiences.”

He added: “Never a day missed, a truly wonderful achievement – and so much pleasure given to so many by two incredibly generous souls giving their time and their imagination.”

While Jo and Pete may not get into the Guinness Book of Records for continuous home-based costumed performances whilst in lockdown, Peter said “they have certainly got the Vall de Pop Record of Achievement for 2020.”

For those who missed their performances, you can see them all on their Facebook at ‘Clearys en Espana’ or on YouTube at ‘Crazy Clearys.’

On behalf of Vall de Pop U3A, Peter added: “Thank you both, from the bottom of our hearts, for what you have achieved by your unselfish efforts to raise the spirits/smiles of those in lockdown.”

Pete and Jo are relatively new to Jalon Valley, having moved to the area 18 months ago, but are already active members of Jalon Valley Help and the Vall de Pop U3A, “so when you see them out and about give them a wave and a loud ‘thank you’,” added Peter.

For more information about the group, check out the website http://www.u3avalldelpop.com