WATCH: Expats on Costa del Sol and Costa Blanca Horrified by Hypocrisy of Brits on UK’s Beach Drinking but Saying Lockdown Should be Stricter like Spain 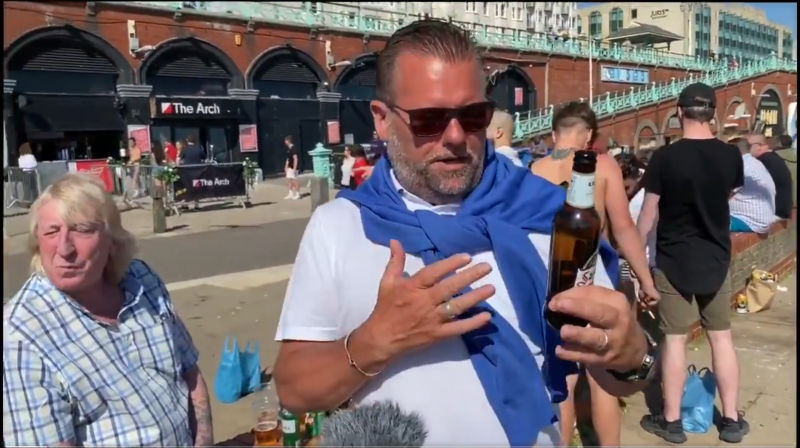 Bewildered Brit: Thinks people should not do what he is doing in that exact moment. Credit: Twitter

A video of British nationals on the beach drinking and enjoying the sunshine with no regard for social distancing measures has gone viral on social media for its hypocritical edge. Expats on both the Costa del Sol and Costa Blanca are absolutely horrified to see this disregard for public safety.

THE interview which appears to be conducted on a beach in the UK features a man holding a beer and drinking who admits his double standard as he says “I know we’re out drinking beer so it looks like what we’re saying is it’s good for us but is not good for anybody else.”

However, in an ironic change of heart he says that “if [the UK] carries on the way they are going” with people flouting social distancing recommendations he thinks they “will have a major lockdown in two weeks” and that he thinks that in “the two weeks” the UK will see a “massive rise in deaths” and that the UK should be much “stricter like Spain.”

Although he recognises his hypocrisy, this sight has still infuriated many people on the Internet who see this as “very frustrating” especially given that others have been enduring a long and hard lockdown with minimal liberties.

Another individual has noted that these people are simply following the poorly instructed principles of the British government and gives the example of Dominac Raab who has said that UK citizens can “travel as far as they like without any limit and no limits to how many times they can exercise.”

Another woman, also part of this group, said that “when it’s family… it’s a little bit different” and that social distancing does not matter, and they are allowed to do that as they are all in each other’s homes anyway.

This is not a matter of generational differences as the next interview is to a pair of young girls who are also seen in the video relaxing and sunbathing on the beach. The young girl complains that since it’s the “hottest day of the year everyone is going to come to the beach… especially when you’ve got places serving a beer.”