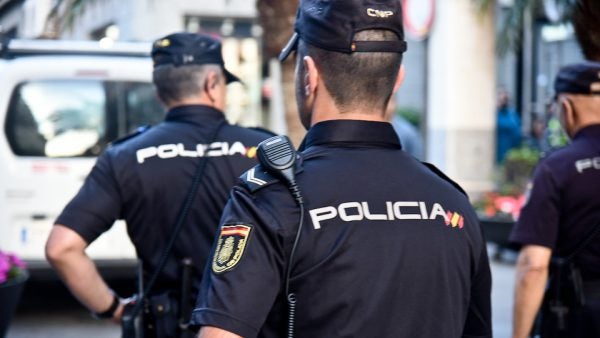 JAIL TIME: Man in Murcia Sent to Jail for Not Wearing Mask and Spitting on Officer . CREDIT: Policia Nacional

Malaga’s Local Police helped to deliver a baby in the middle of a street on Sunday evening during the country’s lockdown.

THE healthy baby boy was born thanks to the help of four Local Policemen. Officers Rafael and Juan Carlos were on their way back to base after a false alarm at the end of their shift, when they were notified about a mother about to give birth in the middle of the street.

When the officers arrived she was already sitting on a chair between two cars. “When we got there, she told us that she had strong pains, so we called for an ambulance immediately,” said Rafael. “But the baby was already on its way.” As neither officers have any children yet, given that Rafael is just 24 years of age, and his colleague Juan Carlos is only 26, two other officers (Carlos and Juan Miguel) jumped in the patrol car as soon as they heard what was happening and arrived on the scene within minutes to help. Thankfully they arrived just in time as the baby was arriving, and able to assist the other two officers.

“Everything happened very quickly,” said Rafael. “We noticed her waters break, and we told her to stand up,” said Carlos, who helped to deliver the baby, then passed the baby boy to the mother once he was born. “I checked to see if the baby was breathing, and we heard a tiny cry and his cheeks turned a rosy pink,” he added. The ambulance arrived shortly after, in time to cut the umbilical cord and transfer mother and baby to hospital.

“It’s complicated times, but being able to help others like this is the best part of our jobs,” according to all the officers. Although Carlos has two daughters, they were born by C-section, so he has never actually had any experience of delivering a baby, but said that “helping to bring another life into this world, was an amazing experience.” Rafael added: “It is certainly one experience that I will never forget.”