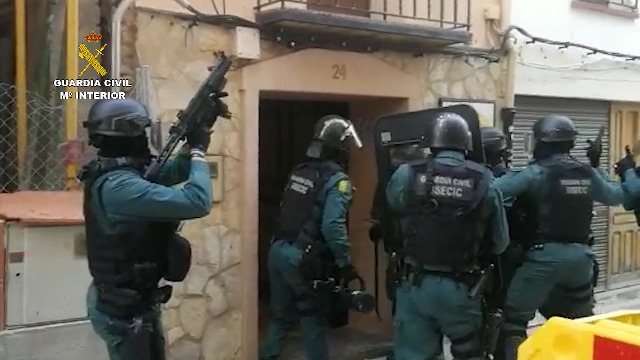 Spain’s Guardia Civil have arrested two men and a woman who allegedly took over two empty houses in Alicante Province, one to live in and another to store stolen goods.

DURING the raids at both properties, officers recovered numerous tools, 158 kilos of copper and 220 kilos of other stolen metals.
The three suspects were arrested in Ibi for illegally occupying homes and stealing metal from establishments in the area, according to a statement from La Benemérita al Dia.
At the end of April, “officers from the Investigation Area of the Guardia Civil in Ibi detected a slight increase in robberies committed in a very focused area of the municipality.”

As an investigation progressed, surveillance began and the team realised that “most of these criminal acts had taken place in the vicinity of a house that turned out to be occupied by a couple, and the man’s brother.”
After several weeks of monitoring, officers confirmed that the house had been “usurped not only for residence but also to act as a centre of operations for their crimes,” the statement added.
“From this building, they had access to other neighbouring premises, such as an abandoned factory, from which they had stolen tools and large quantities of copper, and to the interior of another house, from which they had stolen copper pipes and taps.
“In addition, it was found that in order to store and hide everything that was stolen, they decided to take another house nearby.”
After searches, the Guardia Civil arrested all three suspects “as alleged perpetrators of three crimes of burglary and two crimes of home invasion.”
The judicial authority decreed “provisional freedom without bail” for all of them, with the obligation to appear on the 1st and 15th of each month. They also had to surrender their passports.
The Guardia Civil confirmed that one of the arrested “has a multitude of previous convictions for similar offences” and that together with his partner was involved in a violent incident last February in which they allegedly stabbed a man in front of the house they had occupied.”
The investigation is still ongoing, as police have found evidence to suggest that “in all probability,” the trio are involved in other incidents.