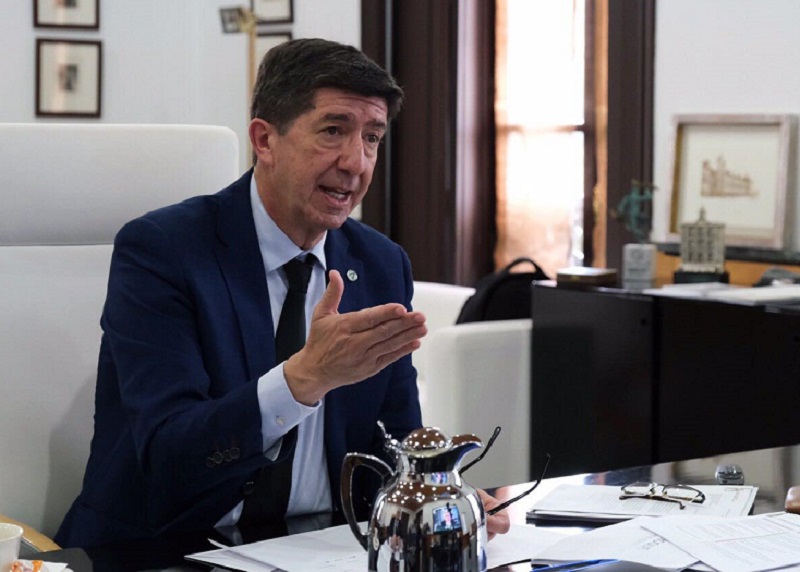 Andalucia's Vice President Juan Marin says its reasonable to ask tourists to get a test before they come to Spain. CREDIT: Juan Marin Facebook @JuanMarin_Cs

This Wednesday, the vice president of the Board and counsellor of Tourism, Regenataion, Justice and Local Juan Marín, estimated that in regard tourist occupation levels in Costa del Sol’s Andalucia the month of July could exceed 60% and 70-75% over the month of August “if the information we have received about reservations is confirmed”.

These figures were highlighted during a digital meeting, ‘Reinventing tourism: a new technological challenge’, organised by the Technological Corporation of Andalucia (TCA), in which they pointed out that, overall figures, suggest the tourist occupation rates for this summer in the Andalucian community could be over 60% percent, although he has warned that there is still some uncertainty at the moment.

Marín has announced that national tourism reservations for the month of August already exceed 75% and that, in the last 15 days, the reservations for the months of July and August in international tourism have increased by 160 percent. “People want to come to Andalucia” said the counsellor, who pointed out that “a lot of connectivity” between Andalucian airports will be recovered in June and “the vast majority of airlines will fly regularly to Andalucia in July”.

In this sense, the Marin has been very “optimistic” that the tourism sector has behaved in an “exemplary” way in the face of the coronavirus pandemic, and that it can “emerge stronger” than ever from this situation. He also noted that “2021 is already a year of recovery”.

Marin has asked the central government to “let the sector work” and, more specifically, it has demanded mobility between provinces that are in the same phase of de-escalation and the elimination of the foreign traveller quarantine before July 1.

If the average stay for tourists in Spain is only 5.7 days, how can they be expected to quarantine for an entire two weeks? Marin urged they find another more suitable “formula” such as testing before getting on the plane. Once again, he has advocated for the use of security corridors between safe countries, temperature controls and pre-flight testing, all measures equally satisfactory when “guaranteeing the trip” and its safety.

He has also indicated the hallmark of “Secure Andalucia” from the Junta which companies can download and place in their establishments to ensure they follow the protocol and recommendations against COVID-19.