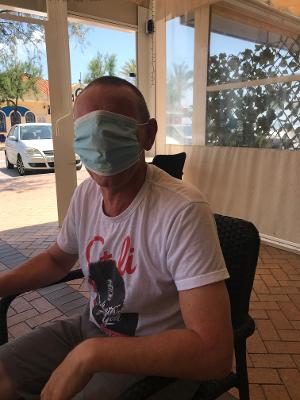 Resistance is taking place on Spain’s Costa del Sol to following the law of wearing a face mask.

THE lawmakers in Spain have introduced a compulsory law that all citizens must at all times when in public spaces wear a face mask but this hasn’t gone down well with British expats on Spain’s heavily populated regions of British nationals.

The wearing of face masks became law when Spain’s government led by current prime minister Pedro Sanchez, introduced a three phase system as the country of Spain de-escalates from a total lockdown.

The lockdown period of Phase 0 as it’s known saw citizens in Spain confined to their homes for three months, only allowed to leave for essentials and was heavily enforced.

Thousands and thousands of fines were handed out during the period ranging between €100-500 and many arrests were made too with several serial flouters of the law sent to Spanish prisons for lengthy terms of up to three months for lack of compliance.

Citizens on Spain’s Costa del Sol have reached Phase 1, whilst other regions of Spain have reached Phase 2, thus the citizens can now visit bars and restaurants as well as local stores, as long as they adhere to the ruling of wearing a face mask and also social distancing. Although Phase 2 starts tomorrow, face masks will still be required.

Social distancing involves citizens staying two metres from each other, whilst business operations can only entertain 50 per cent of its normal capacity.

Resistance though is apparent from citizens especially nationals from Great Britain.

The British don’t seem to be used to such tough regulations.

On arrival to a small local bar, found immediate resistance, without opening his lips, as he came across Andy Millar originally from Glasgow in Scotland, United Kingdom.

As soon as our reporter had ordered a coffee, Millar went into a rage:

“Take your mask off, you don’t need to wear it in here, only the waitress is required to wear one, it’s only on the street we have to act like sheep and follow the crowd.

“Isn’t it bloody crazy, we should all be able to just get on with it, do you know more people die of the flu each year! Do we wear masks for that?” he ranted.

“This Spanish government has got the law so wrong and this phase nonsense is just crippling the economy and destroying businesses, look at how many are shut down already and not reopening.

“In Britain, we have had it just as bad and already we are releasing from the lockdown there in a positive manner trying to protect the economy as well as the people, here we have to act like sheep in masks following the flock, I just don’t get it, I really don’t”

As the conversation spread across the quaint bar others also voiced their opinions of the same nature.

I agree with Andy, it’s plain stupid in my eyes – I don’t see the sense of it at all, a fella had a heart attack the other day wearing a mask in the heat, it’s going to be 30 degrees Celsius today and we are expected to wear a mask, you can’t breathe,” said Mr Tommy Docherty.

“Everyone I speak to, through a mask of course feels exactly the same way,” he continued.

“Spain’s government has been too harsh, I prefer the laws they have at home in Scotland, slightly more controlled than England’s but enough, it’s like a police state around here at present, I was only arrested by the police last week for sitting on a bench,” he finished with.