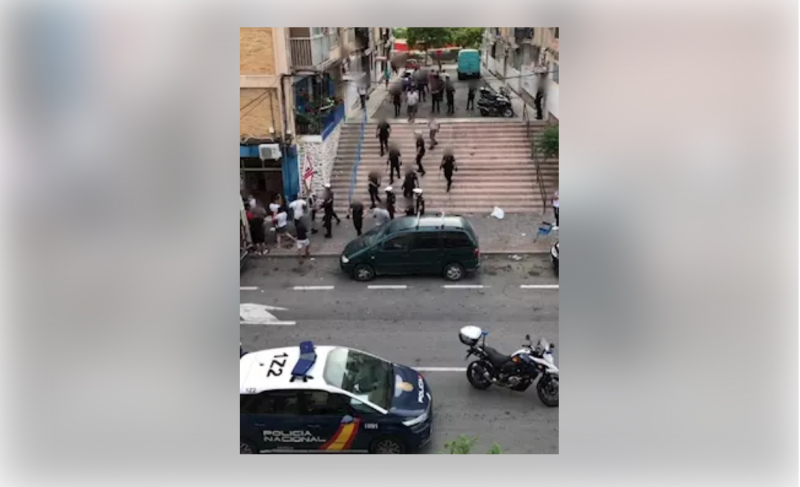 5 police officers in Costa Blanca’s Alicante have been injured whilst 11 people have been arrested during three different police interventions which were carried out in the Requena neighbourhood to avoid a brawl between different clans who were trying to win back territory to sell drugs.

The arrested individuals have been charged with the alleged crimes of robbery with violence, injury with the use of a white weapon and attacks on law enforcement officers. However, the operation is yet to be concluded as police are still trying to locate perpetrators who were also involved in the violent brawl.

The events began at dawn on May 23 when a resident in the area complained that passers-by were throwing stones at his window and therefore the resident tried to record the incident with his mobile phone to save proof of what was happening. However, the culprits who were throwing rocks, took the opportunity to beat him up and violently seize the phone from him.

The resident then went to report the incident to police officers at the station and he identified the perpetrators of the violent act. Then a special unit, in collaboration with the Operational Response Group and the motorcycle group from the Prevention and Reaction Unit went to the neighbourhood to arrest the culprits.

Whilst the officers went to arrest the, the emergency services received a call notifying them that a stabbing had just occurred nearby. Therefore, part of the officers involved in the initial arrest fled to quickly arrest the aggressor who stabbed another man.

The initial police squad proceeded to the aggressor’s house to arrest him and upon entering the house they found a marijuana plantation with around 150 plants in the home, which also led to the arrest of his wife for the drug trafficking.

According to the investigation, the origin of the quarrel could be a possible retaliation between two clans in the neighbourhood regarding the control of drug trafficking territory.

When the police tried to intervene, crowds of neighbours gathered to demand their own justice and a tense climate emerged in which the crowd was encouraged to attack the policemen, even threatening their lives.

The police were forced to call for backup and use force with their riot gear to protect the detainees, pedestrians on the street also tried to defend themselves from being attacked.

The entire brawl resulted in give wounded police officers.