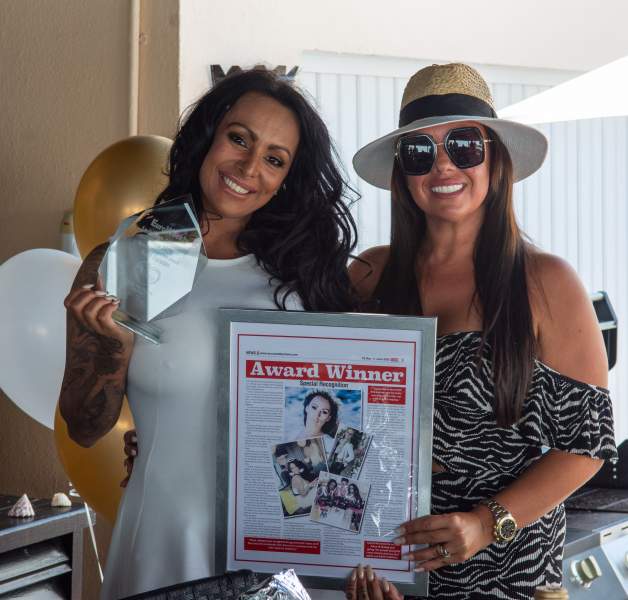 IN last week’s issue we named your local heroes and Euro Weekly News was so happy to pass on your words of praise in thanking them for a job well done.

We also had one winner of a special recognition award who has just blown us away with everything she has done and continues to do for the community, Kara Caradas.

EWN was able to plan a little secret awards ceremony for Kara in Mijas, last Wednesday. Joining her in the celebration were members of her family including her sister Penny Quinlan and her husband Marc, EWN General Manager Nicki Burgess and owners Michel and Steven Euesden.

On receiving her award Kara said “Thank you so, so, so much to everyone who voted for me in the Euro Weekly News, I feel very humbled so many silver linings have come from Covid-19. I can’t thank the public enough for all the support. I am so proud of our community for coming together and making it all possible and Euro Weekly News for the constant support to make sure we could keep going. This was a team effort.”

Kara hit the headlines with her Food Fairies, a group consisting of Kara’s sisters, family, Pippa Jones, Jackie Quick Rice and others who collected and delivered food to families in need all the way from Malaga to Duquesa.

Many local businesses were kind enough to help, whether it be with donations, deliveries or actually cooking full meals. These included Restaurante El Banco, La Scala Marbella, 8 till late, Import Montes Marbella, Society Marbella Magazine, The Shack in Coin and many more.

Kara also helps with many animal charities in the area and when she is not feeding the dogs she sometimes goes as far as adopting them herself. She also runs a project that finds jobs for children from Malaga orphanages or employs them in the restaurants she and her sisters own.

She is the owner of The Boardwalk in Marbella, sister Penny owns The Harbour and The Playwright restaurants, whereas her other sister Charley co-owns The Boardwalk restaurant and owns the famous Mirage nightclub.

For the party, food and cocktails were supplied by Taylor’s Deli, Calahonda with their special private catering service.

Scott Taylor, the owner, pointed out that “The food for the day is part of our very popular BBQ packs. They include home-made canapes, a selection of home-made burgers, sausages, pork chops and Tandoori chicken.”

Check them out at Facebook.com/ taylorsdelispain or call 674 740 781 for more information.