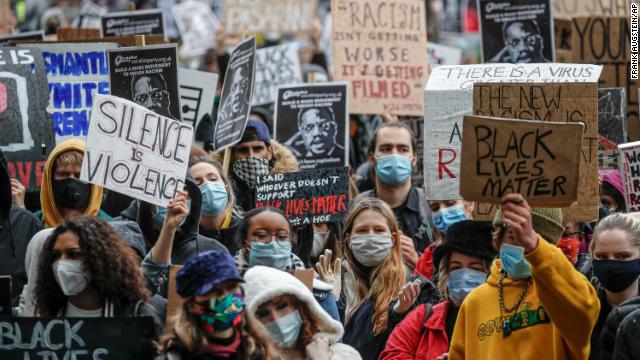 British expats on the Costa del Sol and Costa Blanca are disappointed about the fact that the UK is experiencing a wave of political protests to end systemic racism, under the Black Lives Matter movement, as the country still struggles in its battle with Covid-19.

AN expat on the Costa del Sol, Chris Newsham, goes as far to say that the UK has “lost the plot” due to all the “idiot protesters marching in crowds during a pandemic.” The Black Lives Matter protest even had a small demonstration in the centre of Malaga’s Costa del Sol which the Euro Weekly News covered exclusively.

He argues that Spain may not allow people from the UK to enter Spain this year and that seeing people “shoulder to shoulder” shames him to be British, as protesting during the pandemic is a “disrespect for frontline workers” as they “put their lives at risk.”

The Black Lives Matter movement has gathered momentum not only in the United States and in the UK, but across many countries in Europe. What began as a protest against the police brutality enacted on George Floyd has now turned into a much more poignant movement which aims to end systemic racism and solidify the fundamental rights of black people.

Another Brit, Paris Mills, has an interesting opposite view on the issue of protesting during the pandemic. Mills contends that instead of individuals being angry and “disgusted” that “people are out protesting during a pandemic,” they should try and turn the context on its head. Instead she thinks that people should view it as “disgusting” that “people have to protest at all, never mind during a pandemic, for their basic rights in 2020.”

The UK has had several instances with large groups of crowds forming especially recently as they have enjoyed scorching temperatures and flocked to the beaches. Social distancing on Durdle Door beach was inexistent and so shocking that police had to come and evacuate the beach. Costal MPs have even had to warn residents that this type of crowding could influence the UK and create another spike in infections.

Brits ignoring social distancing, be it at the protests or the beach, is sure to cause a rift in its already over-saturated NHS which has been severely struggling under the coronavirus crisis. Recently the UK surpassed the 40,000 mark on the coronavirus death toll, solidifying its place as the second country globally with the most Covid-19 deaths.