Fear of Sharks and the ‘New Norman’ 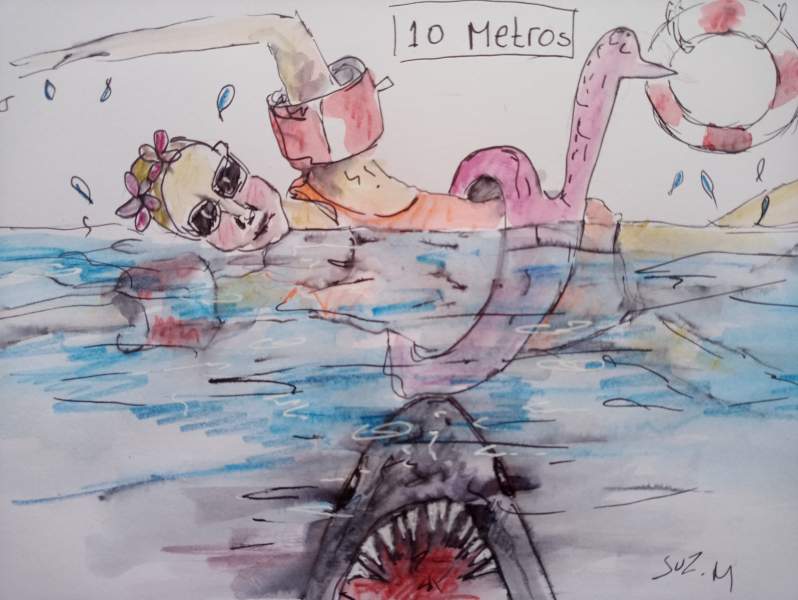 My local public swimming pool has reopened to much rejoicing from the flabby flat dwelling hoards, myself included.

Even better is the new online appointment system which in one fell swoop eradicates the pre-swim stress of whether or not the lanes will be chock full. The system is very civilised, the swimmer chooses a date and time from the list. Your temperature is taken and off one plunges into the freshly chlorinated water of the 50-metre outdoor pool. Utter bliss! Swimming allows me to free my mind and to work through anxieties or problems in much the same way as a good long walk along the beach… except for one very clear difference… fear of sharks!

As my thoughts eddy and flow, the lizard part of my brain sits up like an over-caffeinated meerkat and starts to search out dangers. I have a fear of deep water. I don’t like not knowing what lurks beneath me. Now you might think that a public pool would allay those fears. The rational part of my brain understands that there is no possible entry route for the much-maligned prehistoric fish and that the likelihood of being attacked by one whilst floating on the water’s surface, watching the bored socorristas, watching the swimmers, is non-existent. However, this does not prevent a momentary and vivid flash of the first scene of jaws hurling itself into my mind and having a good kick around.

I remind myself that the dark shape beneath me is the change in tiles (although last week it was an old man wearing flippers and a mask!). Human beings are deftly fooled by their imaginations and mine is probably weirder than most and deeply affected by my late mother’s love of slasher movies when I was a child. I see dead people… and serial killers… and dodgy clowns and monsters and when wet, great hulking sharks with lots of teeth. This weird imagination of mine likes to sit on my shoulder and whisper sweet nothings into my ear at most inappropriate moments. My eyes glaze over and I smirk knowingly. I have been told it gives me a look of intense concentration and deep thinking, whereas, in reality, I am probably pondering the likelihood of Batman ever asking Robin to marry him.

I have an almost Pavlovian response to puns, malapropisms and misheard lyrics. The latest of which is the constant repetition of the phrase the new normal which my mind has now twisted into the ‘new Norman’. As a consequence, I have now invented a whole new person called Norman who has just had an epiphany and changed his entire outlook on life. In my world, he has quit his job teaching geography and is now lazing on a tropical island making friendship bracelets for the tourists. Norman is a new man and is a happy hippy. Good for Norman I think whenever I hear how this or that is the new normal.
As a sideline, BTW Norman makes necklaces from shark’s teeth