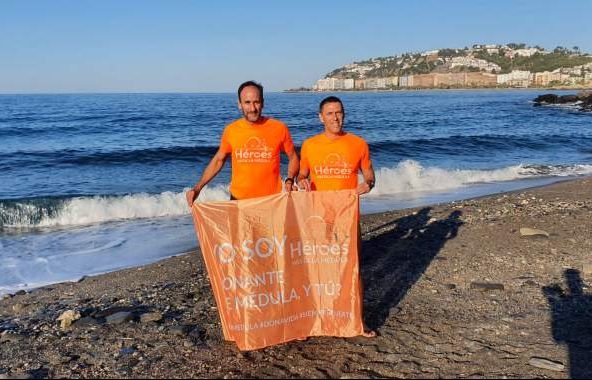 Heroes promoting a great cause in Spain's Axarquia region

EURO Weekly News was lucky enough to speak with Dionisio Torre, on Monday, June 29, a gentleman from Granada, in Spain, who has decided to swim across the coast of Granada to raise awareness about the need for bone marrow and blood donations to help in the fight against cancer in children.


Dionisio along with Belgian swimmer Bart De Rooze started the activity as part of the Medula Swimming project, an idea they hope will grow to cover other sports. “Although we started with swimming we feel that the objective could be linked with any sport, such as Medula Running, Medula Cycling or Trekking,” said Dionisio.

However, the big picture is Heroes Hasta la Medula, a non-profit association started in 2016 by families and friends whose children were being treated for leukaemia in the Pediatric Oncohematology Centre in Granada.
“We do not collect money for the association, what we wish is for people to become aware of its existence and the fact that they may be able to help through blood or marrow donations,” Dionisio explained.
He went on to point out the need for donations, “The Spanish bone marrow donor registry closed 2019 with more than 405,000 donors, of which only 221 became compatible with patients and effectively donated their marrow to save a life. If we get more donors on the registry, more lives can be saved.”
The swimmers also invite anybody that wishes to join them to feel free. Whether it be for the whole of their journey or just in stages. For example, on Saturday they swam across the Costa Granadina between Playa Cabria and Playa Granada, on the fourth stage of their journey which is a distance of over 10km. They were joined by 12 other swimmers for various parts of the swim and were waved on by loved ones and supporters from the shore.

They have eight different trips to make all of around 10 km each. The next stage will be on Friday, July 3, where they will head off from Playa Granada to La Chucha.
Dionisio feels that “this is a project that many sports teams could take part in their own style and also in their own regions, Costa del Sol, Costa Blanca etc,”

He added, “If any swimming clubs from other regions wish to come and swim on the other stages they are more than welcome!”
So strap on your wetsuit, remember the sunblock and join this team who are doing a brilliant job for spreading the word for such an amazing cause!
Should you wish to find out more about what Medula Swimming are doing or watch videos of their swims so far, you can go to Dionisio´s Facebook page here
Also, if you would like to find out about the amazing work Heroes Hasta la Medula do you can follow this link to their Facebook page or their website here