Crowds drink on Newcastle Quayside and ‘idiots’ jump in river 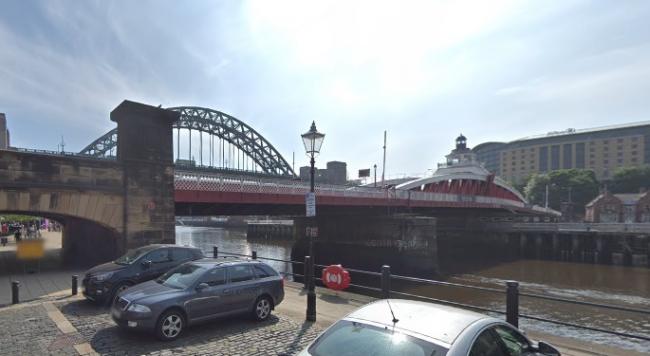 Bars shut down after 'mindless idiots' drink in crowds and jump from bridge. Pic: Twitter

The City Council shut down two bars and issued warnings as groups drank takeaway booze on Newcastle Quayside, leading to anti-social behaviour and people risking death by jumping from the Swing Bridge into the River Tyne.

The authority said the alcohol-fuelled behaviour of “mindless idiots” at the weekend was not only a breach of restrictions in place to prevent the spread of coronavirus but also risked their own lives of those of rescuers.

Councillor John-Paul Stephenson, cabinet member for environment and regulatory services, said: “We received a number of complaints regarding premises that were either open in contravention of lockdown laws or serving takeaway alcohol, which was causing non-socially distanced groups to gather, drinking in the streets and disorder.

“We issued prohibition notices and warnings to licensees, reminding them of their responsibilities and that failing to close is a criminal offence potentially subject to unlimited fines.

“Thankfully all of the businesses not only complied but worked with us and police to try and restore order and are taking steps to prevent it happening again.

“However, with a wider opening of city pubs, restaurants and cafes just days away we must again reiterate that the onus is on the public to be sensible.

“We know there is a pent-up desire to get back to normal, to see and socialise with friends and family, and to enjoy the hospitality that Newcastle is renowned for, yet it is possible to do that without being a mindless idiot.

“Drinking too much or putting yourself and others at risk by failing to social distance is one thing but throwing yourself into the Tyne – as we have seen some individuals do over the weekend – is just madness.

“The Tyne is a big river, with strong currents that can overwhelm even the strongest of swimmers – to anyone thinking of jumping in please don’t. It’s selfish, puts both you and any rescuers in danger and could so easily end in tragedy.”

The Government will allow licensed premises to reopen from this Saturday, July 4.

Newcastle City Council said, along with its partners, the authority is supporting pubs, restaurants and cafes to reopen safely, with licensing applications – particularly those to allow the creation of pavement cafes – being fast tracked to allow appropriate social distancing.

However, many venues across the city have already said they will not open immediately as they are not comfortable that they can keep customers, staff and the wider public safe.

Over the last weekend in June the council issued prohibition notices to Tiger Hornsby and Sambuca on the Quayside, ordering them to immediately cease on-sales, with them both – and the nearby Red House – warned about their takeaway operations.

Drinkers were also reminded that a public space protection order is in effect in Newcastle that bans the consumption of alcohol in public areas, so that the law-abiding majority can use and enjoy those spaces, safe from anti-social behaviour.