London has fallen from first to 10th on the list of the 10 European cities with the most flight reservations, due to border restrictions and quarantine regulations imposed on the UK.

IN recent months these activities have paralysed potential travel from the rest of the world, according to joint research by the World Travel and Tourism Council (WTTC) and analyst firm ForwardKeys. In the first half of June last year, when the holiday season was in full swing, London was the most reserved city in Europe for any arrival date, followed by Paris and Rome. However, due to the impact of the Covid-19 pandemic and travel restrictions, the capital has plummeted at the bottom of the top 10 reserved destinations, behind other cities such as Vienna (eighth position) and Barcelona (ninth position ). Madrid maintains the sixth position reached last year. Meanwhile, Lisbon has risen to the top of the list of the most reserved European cities during the first half of June, compared to the ninth position reached in 2019.

Commenting on the research, Olivier Jager, CEO, ForwardKeys, stated: “It’s alarming to see London, which is Europe’s most popular capital to visit, falling from top spot to 10th place in the ranking of most booked European cities during the first half of June. The UK’s tough new quarantine regulations are almost certainly responsible, and that conclusion is further reinforced by the difference between inbound and outbound bookings. 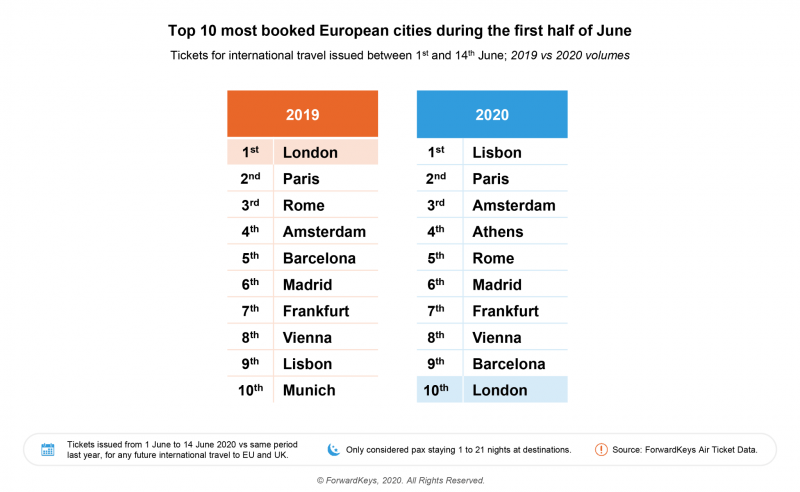 Last year, the UK attracted more than 40 million overseas visitors. This data from WTTC and ForwardKeys shows that if the UK government continues to drag its heels in announcing the next steps for reopening the country, including the removal of barriers such as quarantine and establishing ‘air corridors,’ it will have a devastating effect on the Travel and Tourism sector.

Adding to his comments Gloria Guevara, WTTC President & CEO, stated: “Travel restrictions and quarantines have continued to quash air travel and strangle demand for travel to and from London, causing it to fall to the bottom of the league for top 10 most booked European cities, according to latest flight bookings. However, analysis by ForwardKeys clearly shows demand for flights to and from Europe has begun to recover, thanks in part to a relaxation of travel restrictions, which has fuelled the recovery in the Travel and Tourism sector. We eagerly await the UK government’s announcement it will finally allow travellers to make plans for the summer and visit destinations such as Portugal and allow the UK Travel and Tourism sector to kick-off its much-needed recovery. The implementation of global protocols as well as testing and contact tracing for intercontinental arrivals, as unveiled by WTTC’s Safe and Seamless Traveller Journey initiative, will restore consumer confidence and encourage travelling to resume.”