UPDATE: Denial by Boris Johnson that England-Scotland border exists sparks incredulity among councillors England’s side of it 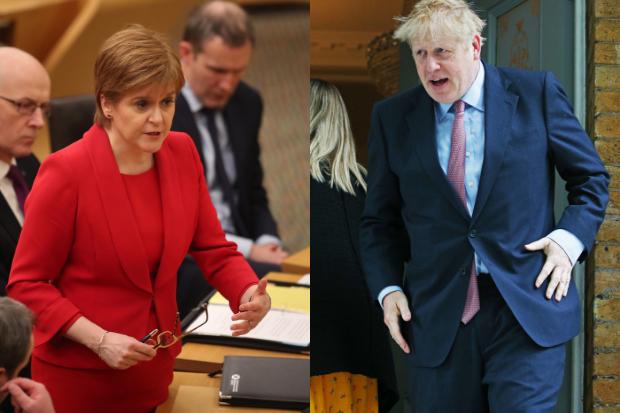 As reported in yesterdays EWN, Boris Johnson got in a bit of hot water after dismissing Scottish first minister Nicola Sturgeon’s refusal to rule out introducing quarantining or screening for travellers from England if infection rates rise south of the border as “astonishing and shameful”, he went on to claim no such dividing line even exists.

That hot water has turned into a geyser from councillors on the ‘border’.

Responding to a question from West Aberdeenshire and Kincardine MP Andrew Bowie in the UK Parliament on Wednesday, he said: “There have been no such discussions with the Scottish administration about that, but I would point out there is no such thing as a border between England and Scotland.”

That claim has been labelled “absurd” by Ms Sturgeon, and she added: “What there definitely is is a geographical boundary to my powers as first minister.”

Hawick and Denholm councillor Clair Ramage said the prime minister’s remark demonstrated a lack of respect for Scots, adding: “I have to deal with complaints from members of my ward highlighting the disregard from members of the public driving north in motor homes, caravans and openly camping.

“People have followed lockdown guidelines since March 23 and many have had to endure real hardship in order to follow the lockdown.

“They do not want to see the positive efforts of the Scottish Government thrown away because of a selfish few, as we saw recently on the beaches of Bournemouth.

“Living on a border has its challenges as people will work on both sides, but what I do not want to see is a second spike and a second lockdown.

“I have seen how people have been affected and if it means we have to close a border and bring in quarantine laws to prevent the spread, then that has to be what happens, as we have seen in Leicester.

“The border was policed during the horrendous foot-and-mouth disease outbreak. Surely it goes without saying that protecting people should be offered at least the same degree of importance.”

Hawick and Hermitage councillor Davie Paterson agrees, saying: “Boris Johnson is talking through a hole in his head. He has obviously never been to Carter Bar.

“I have spoken to some Scottish Tories and they have also said that it was a bit of a foot-in-mouth statement.

“He is obviously not aware that Scotland was an independent country until May 1, 1707, when Catholic clans that inhabited Scotland faced terrible repression when they tried to assert their freedom.

“The Scots were forbidden to speak their native language, Gaelic. They weren’t even allowed to wear their national dress.

“Just try telling all the descendants of the thousands of Scots that were forced out of their homes and settled in many far-flung countries of the world that there is no border between Scotland and England.”

Fellow Hawick and Hermitage councillor Watson McAteer said: “There is without doubt a Scottish-English border that separates countries the border reivers never had any concerns about travelling between.

“I certainly hope that indistinguishable right can safely continue into the future”.

George Turnbull,Hawick and Hermitage’s other councillor, added: “The first minister continues to allow the rumour of quarantining visitors from other parts of the United Kingdom to spiral out of control. She must urgently rule this out once and for all.

“Everyone accepts that public health must be the top priority and, as we are seeing in Dumfries and Galloway, there will be localised outbreaks that will need to be dealt with, as with the likes of Leicester.

“However, any plan to cut off Scotland from the rest of the United Kingdom at a time when our businesses are opening up again is damaging for our economy and only serves to appease the more extreme wings of the first minister’s party.”

Kelso councillor Simon Mountford agrees, saying: “Scotland is an integral part of the United Kingdom and Nicola Sturgeon must rule out once and for all any suggestion that visitors from other parts of Britain might be quarantined.

“Obviously, public health must continue to be our top priority and, as we are seeing in Dumfries and Galloway, localised outbreaks will need to be dealt with.

“However, any plan to cut Scotland off from the rest of the UK is extremely damaging for our economy just when businesses are beginning to reopen.

“Allowing these rumours to continue to circulate serves only to appease the more extreme elements of the first minister’s party.”

Fellow Kelso councillor Euan Robson said: “This issue is a perfect example of the polarisation in which the Scottish National Party and Tories both delight and thrive.

“While they squabble, the rest of us will concentrate on combating the virus and rebuilding our Borders’ economy.

“Testing, tracing and isolation with local lockdowns such as in Leicester are the way forward on health.

“Anyone who knows our part of the world appreciates that closing the border is a nonsense. There are dozens of border crossings and hundreds, if not thousands, of journeys to and fro every day for family reasons, leisure and work.”