Police across the UK in violent clashes on “Super Saturday” 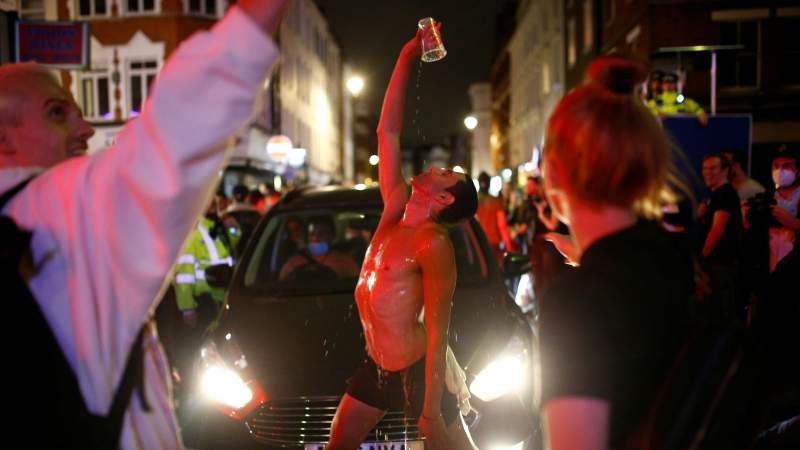 Drinkers flocked to pubs in their thousands yesterday – with many flouting social distancing guidelines – as the UK’s most significant relaxation of lockdown rules so far came into force for the weekend.

As new regulations cleared the path for bars to reopen – on what was widely dubbed “Super Saturday” – pictures showed drinkers packing beer gardens and outdoor areas, it is understood that approximately £200 Million (€224 M) was spent in pubs across the country, 60% more than normal for a Saturday.

On a day that saw hairdressers reopening, weddings taking place in front of loved ones and people meeting friends and family indoors, many people, including Police Federation for England and Wales, said it was “crystal clear” revellers were not adhering to the one-metre-plus rule enforced as restrictions were eased.

The video below was released on Twitter late Saturday, it shows just how busy Soho in London was and how punters abandoned social distancing guidance while going for their first poured pints in months. Video Credit @StephenBlowe

Soho in London is jammers, mask on and home time for me. Absolute madness pic.twitter.com/5lkkCK3zRa

Many Pubs in towns across the UK were forced to close early after ‘major disorder’ on Super Saturday. Boozers were closed in the Nottinghamshire towns of Mansfield, Sutton-in-Ashfield, Arnold and Newark, with police making four arrests, after reports of ‘major disorder’ when pubs reopened last night for the first time in months.

The Ravensdale pub in Mansfield posted on its Facebook page that it would be closed “until further notice” due to “irresponsible behaviour”.

Inspector Craig Berry stressed that the pubs, rather than police, had chosen to close the pubs, saying: “Officers were quickly on the scene to deal with a number of alcohol-related anti-social behaviour reports including a smashed window and minor assault.

“As a result, four arrests were made by officers and we supported licensees who chose to close their own premises.”