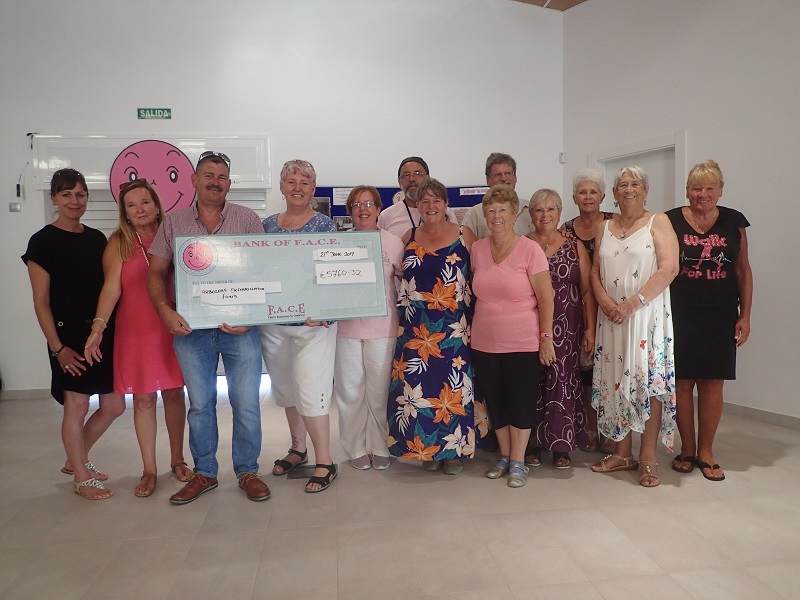 FUNDRAISING: FACE has donated nearly €150,000 to charities and organisations over the years. CREDIT: F.A.C.E.

EXPAT-RUN charity Fundraising in Arboleas, Caring for Everyone, or FACE as is popularly known, has closed down 17 years after it was founded.
FACE member Richard Tolman reported with “great sorrow” that it ceased to exist as a charity from July 1.
The charity began as an event to raise money for the MacMillan Nurses in the UK, organised by Adele Wrigglesworth at her home in Arboleas, with the help of friends and neighbours. However it was felt that money raised in Spain, should remain in Spain.
And so with considerable help from Arboleas Council, FACE was set up with Adele as the first President, a position she held for over nine years until moving back to the UK to spend more time with family.


Current president Carrie Ann Earl and vice-president Gilly Elliott-Binns, have both been with FACE since its inception, and Richard just over 12 years, making them the charity’s three longest serving members.
FACE became well-known for its Christmas markets, but more than anything for the going on for nearly €150,000 it has donated to various charities and organisations over the years.
Spanish national charities the AECC (Associacion Espanola Contra de Cancer), and ALCER (for renal diseases), have both benefitted from FACE’s fundraising efforts. On a more local basis, MACS (Mojacar Area Cancer Support), Grupo 106 Saliente Albox Scouts and the Little Owls have all received funding from FACE.
Richard told EWN that money red circled for the Arboleas Defibrillators will now be given to Arboleas Council, and any “residue monies” FACE has at the end of the closing down period will be donated to local organisations.
Richard expressed the charity members’ enormous gratitude to the public for their support.
“FACE realises how much you have all helped in so many ways, both large and small, and we thank you so very much. We could not have done it without you.”