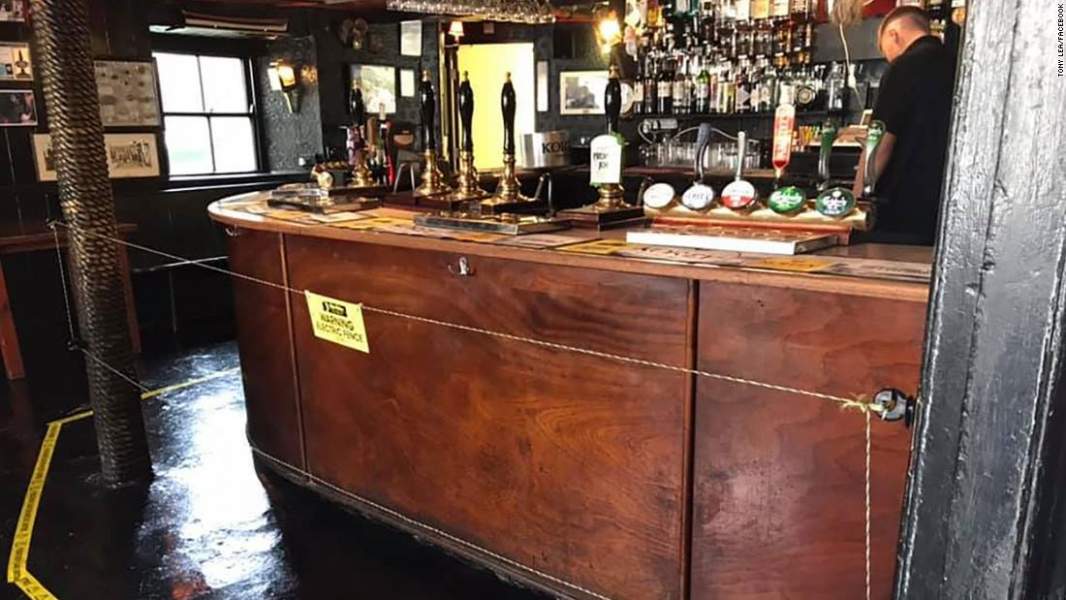 Electric fence around the bar in the Starr Inn. Pic: Twitter

Social distancing, that’s a phrase you hear multiple times every day now, and it’s even the law in some places since the pandemic first emerged back at the start of the year.

SOME of the most difficult places to keep a safe distance are the places we want to frequent the most, theatres, cinemas, family gatherings, and of course the big one, the Pub.

Most bars and restaurants have put into place protocols to attempt to keep the punters at a safe distance from the staff and each other by marking out the floor into zones, or spreading the tables out more, some have even gone so far as to put up actual plastic barriers on and around the tables!

But there is one man who has taken this to what must be called ‘extreme’ measures.

Pub Landlord John McFadden is the landlord of the Starr Inn, in the lovely town of St Just, in Cornwall and he has his own rather unique way of keeping the punters from getting too close to the bar, where you or I may have put up a rope, or painted a ‘do not cross’ line on the floor in front of the bar, John has fitted, wait for it, an electric fence!

John was interviewed on America’s CNN network and he told them: “To protect staff and myself and my customers you have to put in the metre(distancing rule in the UK), rule,” he said.

McFadden said he wanted “to put some rope, or chain” to make sure customers kept back from staff at the bar but couldn’t find suitable equipment.

“I thought, this is not going to keep them [the customers] back,” he said. So instead, he opted for the fence to see “what that does.”

For most of the time the electric fence is not switched on, but the punters don’t know that!

McFadden said: “It’s not on but it’s got the desired effect that everybody thinks it’s on and they keep well away from it. It’s the fear factor. It’s working very well,”  then he was asked what was the customers’ reaction to the possibility of getting a shock if they got too close to the bar, he said: “It was quite comical. We’re in a rural area so everybody knows what an electric fence is. I got a little sign too on it – ‘electric, danger’.”

Thing is it’s actually working, the clients are keeping a respectful distance from the bar, and John is happy with the safety aspect of the device, I’m not so sure how well it will work later in the evening when the locals get a bit of a party on though, it could become part of a bizarre drinking game!

I’m also hoping that the idea doesn’t catch on, or queueing at the post office could become a dangerous sport!