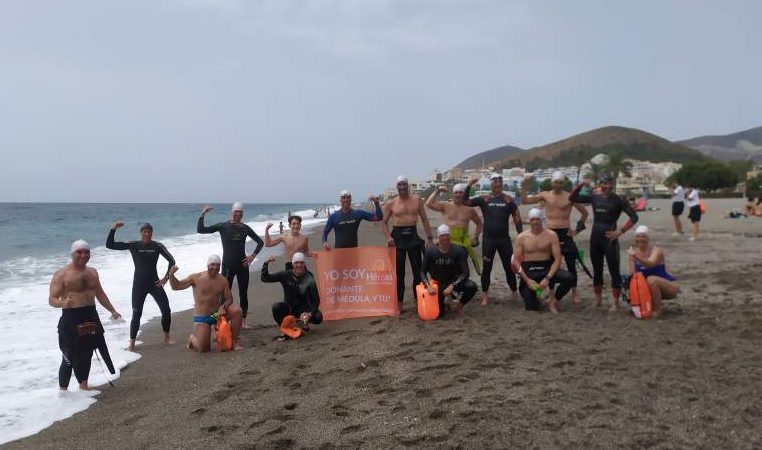 EWN recently brought you an interview with Dionisio Torre who along with Bart de Rooze has been swimming along the coast of Granada to raise awareness of the need for bone marrow and blood donations to help fight against cancer in children.
As an example of the tough journey they are enduring, Dionisio and Bart were at one point able to cross the 16 kilometres of the Strait of Gibraltar in five hours, but this past Sunday they could not cover the 10 kilometres between the beaches of Calahonda and El Lance due to the strong gusts of wind and current.
The men took the dangerous decision to swim as close to the rocks as possible to avoid the area.
The adventure of this past Sunday started in Calahonda was the sixth stage, after leaving from the border with Malaga, a little over a month ago.
Little by little, other swimmers joined in as they advanced along the coast. “We made a quick stop on the beach of Castell de Ferro, where other swimmers joined, and we sent a message to those who were going to join later to warn them that we were not going to reach El Lance.”
For Dionisio, it was a bit of a frustrating stage “but at the same time very beautiful, for such a cause as the donation of marrow and blood, which justifies it.”
He added, “Anything that saves lives by donating has its reward,” he says.
For this last adventure, two other swimmers from Almería and one more from Fuengirola joined, forming a platoon of almost 20 athletes.
Two stages remain to reach Iguazú Beach, which borders Adra.
The next departure will be on Sunday June 19 and the stops to join and their schedules can be found through the Médula Swimming profile on Facebook.