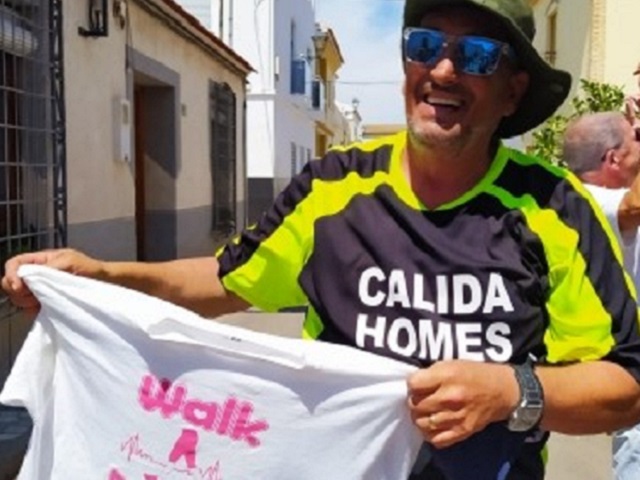 WORTH IT: The final amount raised for the Arboleas Walk for Life cancer charity is at least €2,100 CREDIT: Richard Clarke

“A genuinely bonkers idea for the time of year”, was how Richard Clarke described the 36-kilometre charity fundraising hike from Arboleas to Los Gallardos he and a small team successfully completed in searing summer heat.


Richard, the owner of Arboleas-based estate agency Calida Homes, along with David Lyons, Keith Lazelle, and Raymond and Tessa Roofthooft, put their best feet forward on the last Saturday in June for Arboleas Walk for Life.
This registered charity helps people affected by cancer and in financial need, of all ages and nationalities, within a 25-kilometre radius of the locality.
In normal times its biggest fundraising event is the annual six or three-kilometre walk around Arboleas, and Richard normally takes part. The Covid-19 pandemic meant it could not go ahead this year.
Richard’s plans to walk a large section of the Camino de Santiago with his son in May, and as they had done previously raise funds for Walk for Life, also fell victim to the health crisis.
And so he came up with the idea of the walk to Los Gallardos walk instead.
Los Gallardos is where the Calida Home’s walking football team FC Los Amigos has its grounds and trains. The team raises a lot of money every year for Walk for Life, and has staged a number of events this year on a reduced scale.
The idea was for Richard and the other walkers to meet up with the team members in Los Gallardos to see them all for the first time since lockdown and collect the approximately €500 they’d collected.

Richard told the Euro Weekly News that in retrospect he should have done a lot more preparation for the very long hike than just three to four kilometre a day walks with the family dog.
“It wasn’t anywhere near enough!”, he admitted.
“When I came up with the idea it seemed tough, but possible. The closer it got to doing it, the more nervous about it I became.
“The temperatures were soaring and a lot of the route was on very busy, not to pretty roads. “Over the last eight kilometres it reached 35-38 degrees, and I developed three huge blisters which made it very difficult to walk.  If it wasn’t for the support of my fellow walkers, I genuinely wouldn’t have made it.”
But make it they did, raising at least €2,100 overall for what Richard describes as a “fantastic cause.”