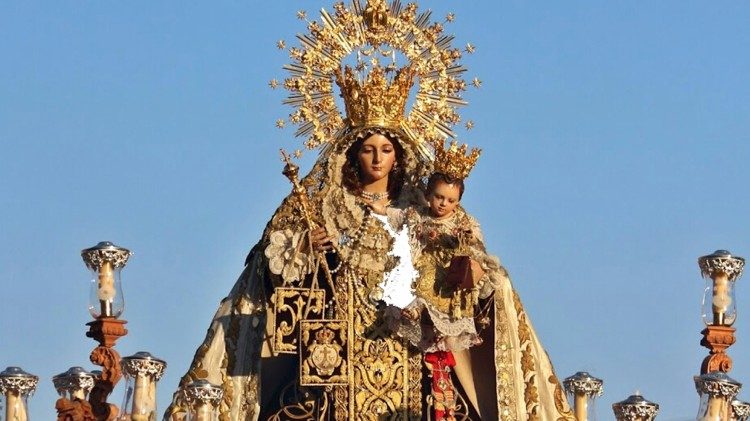 For hundreds of Years, The Día de la Virgen del Carme has been celebrated across Spain, but tonight the streets are empty and quiet and without processions.

The Día de la Virgen del Carmen is celebrated on July 16th in many coastal towns and villages throughout Spain. Places as diverse as Almuñecar, on the coast of Granada province, and Puerto de la Cruz in Tenerife share the festival with many other coastal communities in Malaga (Andalucia), Murcia, Valencia, and Catalonia.

More than twenty processions were held on July 16 of last year along the entire Malaga coast, where the fairs and festivals associated with the religious celebration of Carmelite devotion have also been suspended. This is the case of the El Palo neighborhood in the capital, which, however, maintains the celebration of the dawn mass in the Angustias parish, at 7 o’clock, an act that will be broadcast by TV Canal Málaga.

The Paleño temple will be open from 9 a.m. to 2 p.m. and from 5 p.m. to midnight so that devotees can pray before the image of the Virgin. The Brotherhood of Carmen de Pedregalejo will also celebrate dawn mass at 7 am and its image can be visited from 6 pm until the end of the day.

The Old Testament prophet Elias, towards the end of his life, became a hermit in a cave on Mount Carmelo. Hundreds of years later, pilgrims trying to follow in the prophet’s footsteps, invoked the protection of the Virgin Mary of Mount Carmelo – Stella Maris, the Virgin of Carmen. Now, the Virgin is the patroness and protector of all seamen, fishermen, and even, as we shall see later, scuba divers.

Most of the Día de la Virgen del Carmen traditions involve at least one parade through the town, making its way to the seafront. Usually, a flower-strewn effigy of the Virgin is carried through the streets by a group of local fishermen. When they reach the sea, they are usually met by a flotilla of illuminated and decorated boats, all sounding their horns.

The Virgin, according to the legend, is responsible for keeping the waters around the shore clean and safe; many devotees used to refuse to swim until after July 16th!