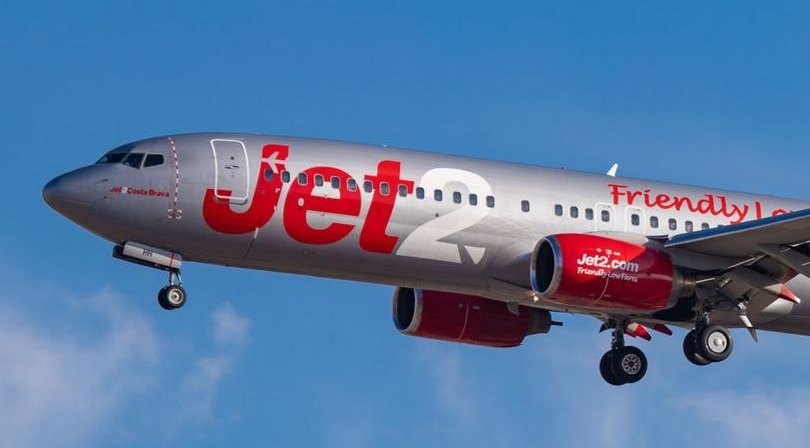 The Jet2 plane had just taken off from Leeds Bradford Airport on a budget flight to the Spanish holiday hotspot before chaos erupted and panic set in.

A dad wet himself before he chillingly threatened to “take down” a Jet2 plane in a drunken rampage, the court in Leeds heard. David Bronson, 41, a painter and decorator, put one of his children in a headlock and staggered up and down the flight destined for Malaga in Spain. The incident sparked “mayhem” on July 11, 2019, Bronson had been drinking heavily and had a fear of flying.

Petrified passengers sitting across the isle from Bronson said he whispered something along the lines of ‘I will take this plane down‘ before he was escorted off the plane when it landed in Malaga and was arrested by Spanish police.

Prosecutor Carley Green said Bronson was drunk and slurring his words and had wet himself before becoming aggressive with his partner and young daughter. A large bottle of vodka was later found by his seat by cabin crew. The court also heard that Bronson had grabbed his daughter’s face, making her cry, and slapped her lightly.

The prosecutor said: “He was heard to say, ‘I will take this plane down‘, but there are three different accounts from passengers and crew of what he said.

“He said he said, ‘you need to hurry up and bring this plane down’ as he is an anxious flyer. His little girl shouted, ‘Daddy, no!'” Another passenger witnessed Bronson slapping his partner, causing her head to jolt back, and telling her: “I told you it would happen again”.

Police were contacted so they could arrest Bronson upon landing. Ms. Green said Bronson fell asleep soon after and staff were afraid to wake him to tell him to put his belt on for landing as they were unsure of what he might do.

Last month at Leeds Magistrates Court, Bronson had pleaded guilty to being drunk in an aircraft, he appeared in court this time for sentencing. The defendant, previously of Pudsey but now of Fairfield Hill, Bramley has seven previous convictions for eight offences, including failing to provide a specimen for analysis.

Martin Morrow, mitigating, said: “He has, for a number of years, flown for pleasure and business but finds it particularly difficult. “He took alcohol prior to the flight as a means to calm himself down but he concedes he drunk more than he should have. “Things got to be too much for him.” He said Bronson lives with his sister while his children live with their mother and he is on furlough but is due to return to work next week.

Sentencing, Judge Rodney Jameson QC said: “Your behaviour during the course of the flight was appalling. “You created mayhem within the cabin at least mentally for those who were anywhere near you, particularly your partner and one of the children.” Jailing Bronson for four months, the judge said: “Anyone who contemplates getting on a flight in this state must know that custody will follow.”