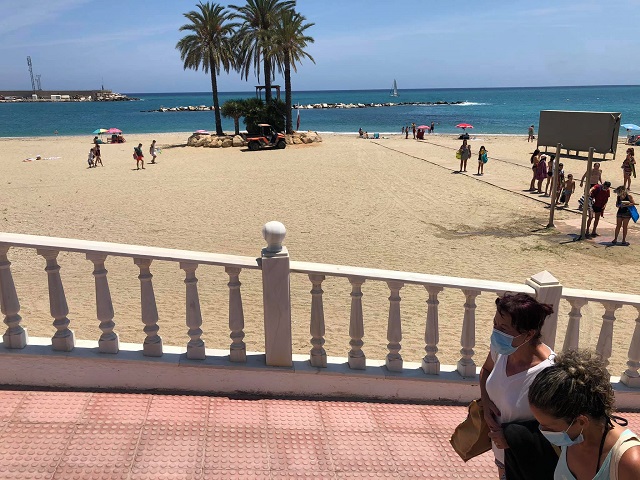 EXPATS on Spain’s Costa Almeria have expressed their fury over people flouting the Andalucia-wide rule making it compulsory to wear face masks at all times.
In posts on local social media forums there were reports of people out and about on Mojacar Playa’s promenade on Saturday morning with masks slung round their elbows rather than covering their faces.
One resident hazarded a guess that as many as 25 per cent were not wearing a mask on their arm or anywhere else
“They are just ignorant”, was one response.
“It makes no sense at all unless we all wear them”, pointed out another.
“They hopefully will get caught, what idiots”, was a further opinion, while there was more than complaint at what seemed to be a lack of police presence on the prom.
“It’s all so random and people won’t conform to rules that make little sense”, was another thought.
Yet the common view is that it is just a minority who are not taking the face mask rule seriously. Certainly when the Euro Weekly News went to take a look round Mojacar Playa on Saturday evening the only individuals who didn’t have a mask on were small children, those doing serious exercise, still on the beach or sitting on terraces.
One forum post meanwhile reported a “heavy police presence and 100 per cent compliance in Mojacar Pueblo on Friday night.
“So impressed that almost everyone here in this part of Spain is obeying the rules”, commented British surgeon Roger Adlard after a visit to Garrucha on Saturday.


Roger, who has am apartment in the area and has been a frequent visitor to the Costa Almeria for the last 25 years, has just arrived for a holiday.
He is of course very used to wearing a face mask every day for his job, and told the Euro Weekly News, “even I struggle wearing one in 30 plus degrees, so I’m very impressed that people are managing.
“The on the spot fines of €100 euros by the copious number of police around obviously helps though.”
Under the Junta de Andalucia law, which came into force on Wednesday, everyone aged six and above has to wear a mask in indoor and outdoor public spaces, whether social distancing of at least 1.5 metres is possible or not or risk a €100 fine.
The exceptions to the rule include when actually sitting on the beach or by a pool if social distancing is maintained, doing outdoor sport or when eating and drinking in a restaurant or on a bar terrace.
People with respiratory problems or an illness which could be aggravated by using a mask are exempt from the regulation, but must carry proof of the condition.