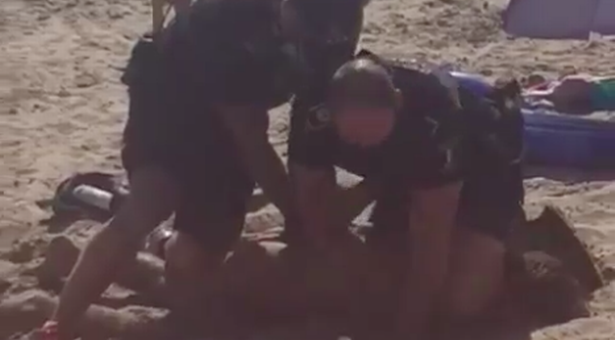 Screen shot of Officers kneeling on the man. Pic: Facebook

Shocked sunbathers were left agog when a man stripped naked and went for a swim at a family beach in Benidorm, then he appeared to resist arrest when officers attempted to remove him from the area.

Levante Beach in Benidorm is one of the first beaches to have a pre-booking system in place to control the number of sun seekers during the pandemic, The man was seen to put his arms in the air as if he was celebrating, then he left the water only to sprint back fully naked with his pet splashing around without a care in the world it seemed, as police approached him.

Officers tried to overpower him and he was heard to shout abuse in Spanish whilst trying to fend them off.

Eventually the man was manhandled to the ground and restrained in a move which was very similar to the hold put on George Floyd, (which killed him), in America.  The police officer put his knee on the back of the mas’s neck to restrain him.

There was a spontaneous round of applause as the man was carted off, with a stranger following them with the man’s dog.

The police were wearing facemasks, but the man whom they arrested did not have one in his possession.

One British expat wrote on social media: “Look at what happened to George Floyd and they do the same thing again.

“He doesn’t look like a dangerous man to me.”

Another added: “What a disgusting society. People expressing happiness at the arrest of a man who’s not harming anyone. I think the arrest is over the top. Shameful.”

Alfredo Martin said: “The illegal cocktail sellers, the prostitutes and the thieves don’t get arrested like this. The police action is over the top.”

A local who applauded the arrest insisted: “If the man held had let police put the handcuffs on him, the officers wouldn’t have needed to exercise any force.

“What that man was doing is illegal and to live in society you have to obey the laws.

“It’s easy to judge the police without being in their shoes. When something serious happens, we always go running to them.”