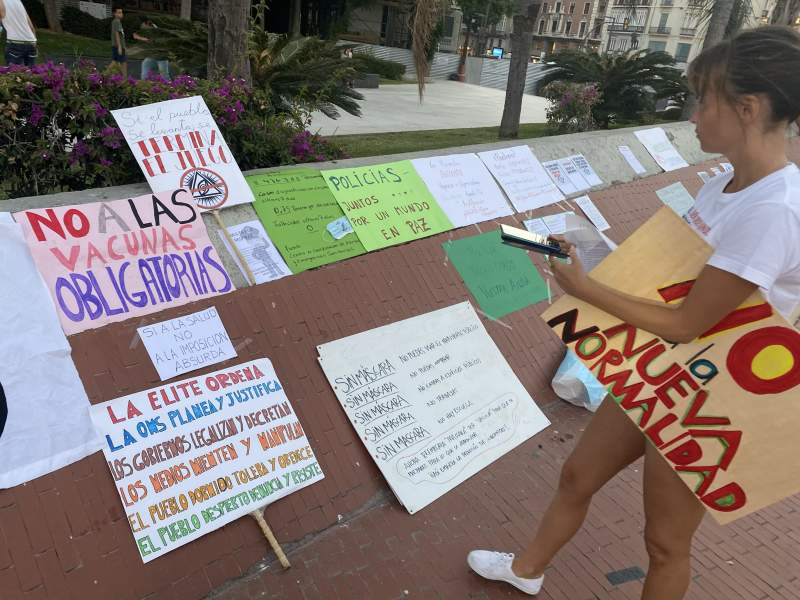 No To A New Normality Credit: EWN Exclusive

A bizarre protest broke out in Costa del Sol’s Malaga on Saturday afternoon in which people flocked together to complain about the ‘new normality.’ The reunion brought about an array of different people. Some anti-vaxxers, other anti-masks, and some protesting against the new normality.

THOSE protesting against the use of masks were claiming that these thin plastic coverings were the reason why people were dropping dead. This misinformation has been already disproved by medics across the world.

Some protestors were questioning wheter the health crisis truly was real because they could no longer experience it. A protester was demanding that things truly go back to normal as there is no longer a pandemic.

“Slavery still exists” was one protestor’s slogan in relation to the need to wear masks. Another protestor was arguing that 5G was the real culprit behind the crisis and that it should be eliminated on the Costa del Sol.

There was a medium-sized turn-out of around 25 people. Many were simply passing by and curious as to what this protest was against. Nevertheless, the protest lacked some sense of direction and leadership as each person appeared to be against a different issue.

Some protestors argued that being forced to wear a mask will then lead to a forceful vaccine. If they no longer allow you to enter public transport without a mask, they may do this in the future with a vaccine, is their argument.

If you enjoyed reading this EWN exclusive, ‘Costa del Sol Protests Against New Normality,’ don’t forget to like and share with your friends. For more regional news about the Costa del Sol please follow this link…